Q1. Which mechanism provides a scalable multiprotocol tunneling framework with optional dynamic routing?
a. NHRP
b. IPsec
c. GRE
d. 802.1X
e. None of these answers are correct. 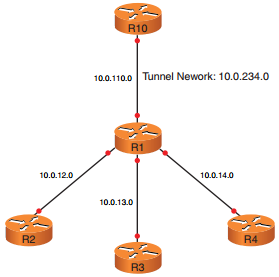 Q6. GRE uses which IP protocol in combination with IPsec VPNs to pass routing information between connected networks?
a. 89
b. 50
c. 47
d. 51
e. None of these answers are correct.

Q7. When a spoke router initially connects to a DMVPN, it registers its inner (tunnel) and outer (physical interface) IP address with which of the following?
a. NHRP server
b. DHCP server
c. Cisco ACS Server
d. Cisco Security Manager
e. None of these answers are correct.

Q9. If a DMVPN spoke router is configured with a point-to-point GRE interface, the spoke will only participate in which type of topology?
a. Strict hub-and-spoke
b. Partial mesh
c. Full mesh
d. Token ring
e. None of these answers are correct.

Q10. On the hub, what is the main factor that determines whether the DMVPN will operate as strict hub-and-spoke or as partially/full mesh?
a. Routing protocol functions
b. Network administrator preference
c. Bandwidth to the hub
d. Cisco router hardware model
e. Cisco IOS Software Release

Q11. A _____ cloud is a collection of routers that are configured with either an mGRE interface or a point-to-point GRE interface (or a combination of the two) and that share the same subnet.

Q12. The _____ created on the mGRE interface on the hub must be large enough to accommodate all the spoke routers’ GRE interfaces.

Q15. DMVPN greatly simplifies the configuration requirements on the _____ router.

Q16. NHRP on the hub provides DMVPN spokes with the ability to locate other _____ routers.

Q17. _____ populates each spoke’s routing table so that each spoke knows about the subnets behind the other spokes.

Q18. In a hub-and-spoke deployment, all traffic between spokes must flow through the _____