1. What specific use cases are impacted?

Any use cases that involves the use of a Java Applet will be impacted. Such as:

b. JSAM: JSAM is a Java based applet and is impacted.

c. Premier Java RDP applet: This is another Java applet based access method and is impacted.

2. I do not use a browser to sign-in or start my SSL VPN session; instead I directly launch the Junos Pulse Client installed on my computer. Am I still impacted?

No. If you directly launch the Junos Pulse client then you will not be impacted by this issue as this use case does not involve the use of any Java applet.
3. What about applets delivered through Juniper’s Java Applet Rewrite Engine?

Juniper’s Secure Access (SSL VPN) solution offers a powerful option of rewriting Java applets, making it possible to use Java applets without a client. When using this access method and SA 7.1R17, 7.3R9, 7.4R7, 8.0R1 or later, the rewrite engine will automatically add the ‘permissions’ attribute to the manifest file after rewriting the applet only if the original applet had this attribute set. Refer KB

Java Update 51 has introduced changes that mandate the presence of this “permissions” attribute along with the requirement of code signing all applets. The issue described in this KB is due to the older versions of applets not containing the “Permissions” attribute within the manifest file.

This issue has been resolved in Secure Access (SA) version 7.1R17, 7.3R9, 7.4R7, 8.0R1 and later versions. The issue was resolved by adding the “permissions” attributes within the manifest file.

If you are unable to upgrade your SSL VPN platform to one of the above mentioned versions then as a workaround end users can use the “Exception Site List” feature described here. In the example shown in the below screenshot the SSL VPN gateway device is accessed via URL https://ive77.sslvpnlab.com/ 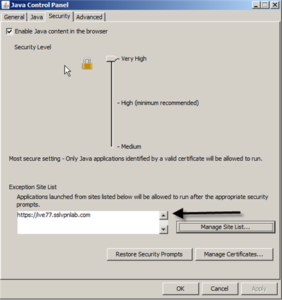