You can now download the game for free on Apple Arcade if you’ve already subscribed to the service.

Earlier today, WayForward – the publisher famous with a lot of platforming and action games – has released a new 2D run and gun action game called Spidersaurs for the newly-released Apple Arcade service. This game was previously named Spidersaurus and was developed by the old team of Konami that famed with Contra 4 on the Nintendo DS. You can play this game for free if you’ve already subscribed to the Apple Arcade.

You will have to fight against those ‘dinosaur-with-eight-leg’

The game is all about the titular Spidersaurs, which is a dreaded creature that can destroy humanity if left unchecked. As humanity’s final line of defense, you will have to pick up your guns and fight against those deadly creatures. With the creative minds of the team behind Konami’s successful Contra 4, this game features a bunch of excitement and explosions on-screen, that, according to the developers, will bring an extreme amount of fun in one gameplay session for the players.

By the words of WayForward, the main inspiration for Spidersaurs came from classic 2D action games like the Contra franchise, as well as the cartoons of the 2000s. The titular Spidersaur creature was created by the fictional INGESTCorp as a solution for global hunger – but an experiment that went wrong has led to those spider-dinosaur hybrid creatures escaped the lab – and threaten the safety of humanity. 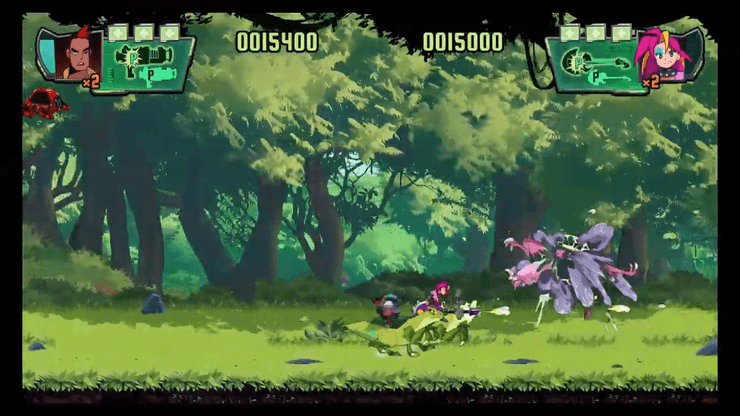 A screenshot from the game

In the game, you will become one of the two playable characters: punk-rocker Victoria and officer-in-training Adrian, to fight against the Spidersaurs. In the game, you will have access to a wide variety of weapons, including machine guns, spreads, lasers, fire guns (which are all really familiar with Contra fans). Along with that, the game also features special Spidersaurs power that you can encounter during the raid of INGESTCorp facility.

You can now download the game for free on Apple Arcade if you’ve already subscribed to the service.