Q1. Name the two contexts in which the term agent is used in network management.

Q2. Compare the manager/agent and client/server paradigms. What are the commonalities, and what are the differences?

Answer: In both cases, communication between the two roles is asymmetric. Manager and client roles are analogous, in that both own the initiative in the relationship and both send requests to the system in the other role. Agent and server roles are analogous, in that they are both subservient to the requests sent by the system in the other role. However, the manager/ agent paradigm differs from the client/server paradigm because general managers manage many agents (each one managed by only one or very few managers), whereas servers serve many clients. 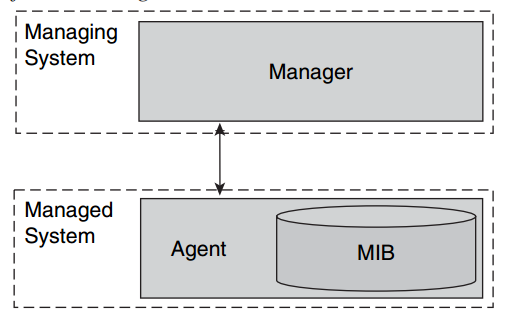 Q4. Explain the term MIB—what does the acronym stand for, what is it, and who provides it?

Answer: MIB stands for Management Information Base. It is a conceptual data store that represents an abstraction of a network element for management purposes. It is provided by a system in an agent role.

Q5. Name one difference between a MIB and a database.

Answer: The MIB represents a view of real resources, not a set of passive data items that need to be maintained from the outside.

Q6. Tell whether the following statement is true: “If a network is required to have availability of 99.999 percent, its management systems need to also be 99.999 percent available.” Why or why not? Please elaborate. For extra points, factor in the influence of the type of application that the management system is used for.

Q7. Management traffic is different from other communication traffic, in that the NE itself is a destination and originator of traffic. However, it is not the only type of traffic for which this is true. Name an example of other network traffic that the NE does not just switch or route, but actively participates in.

Answer: Control and signaling traffic, such as traffic from routing protocols.

Q8. What could be the most important reason for using a dedicated management network instead of a shared one?

Answer: The most important reason generally concerns reliability. In case of network failures and congestion, it is important to communicate with network elements to diagnose what happened and apply reconfigurations to remedy the situation remotely. Without a dedicated management network, in those cases it will be hard to get through to the network element, just when it is needed the most. A second reason concerns avoiding interferences with other network traffic, with which management traffic would compete for networking resources.

9. Which other term do service providers use to refer to management systems?

10. Would you expect a management system to provision services to be located at a NOC or at a Central Office? Why?

Answer: At a NOC. The NOC is the Network Operations Center from which network management involving operations personnel takes place. Central Offices, on the other hand, resemble remote branch offices in an enterprise. They terminate local lines and might not even be staffed.