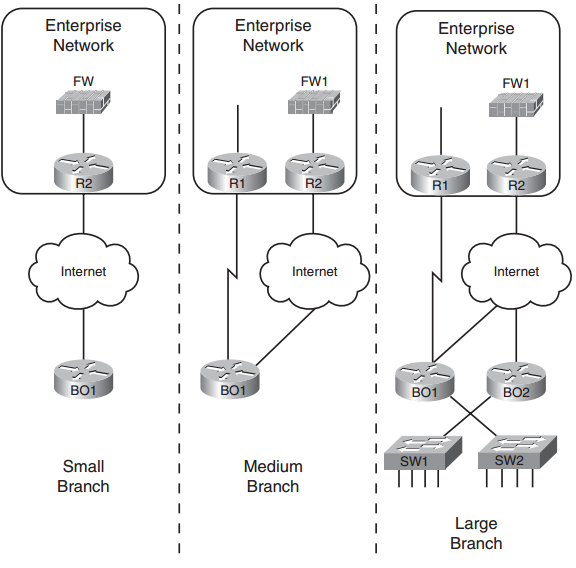 Answer: C. IPsec tunnels make for more secure communications, including encryption and authentication. However, it does not support IGP communications across the tunnel.

Q2. Router R1 sits at an Enterprise branch office, using both the Internet and a leased line to another Enterprise router for its two connectivity options back into the rest of the Enterprise network. The engineer planning for this branch decided to use the leased line for all Enterprise traffic, unless it fails, in which case the Internet connection should be used to pass traffic to the Enterprise. Which of the following is most likely to be useful on the branch router? (Choose two.)
a. IPsec tunnel
b. GRE tunnel
c. Floating static route
d. An IGP

Answer: A and C. An IPsec tunnel would be useful to allow the packet to pass over the Internet and into the Enterprise. The GRE tunnel would only be needed if an IGP is also needed, and for this design, an IGP is not required. Instead, a floating static default route would work fine, with the static route sending traffic over the IPsec tunnel but only when the private leased line fails.

Q4. Router R1, a branch router, connects to the Internet using DSL. Some traffic flows through a GRE and IPsec tunnel, over the DSL connection, and into the core of an Enterprise network. The branch also allows local hosts to communicate directly with public sites in the Internet over this same DSL connection. Which of the following answers defines how the branch NAT config avoids performing NAT for the Enterprisedirected traffic but does perform NAT for the Internet-directed traffic?
a. By not enabling NAT on the IPsec tunnel interface
b. By not enabling NAT on the GRE tunnel interface
c. By configuring the NAT-referenced ACL to not permit the Enterprise traffic
d. By asking the ISP to perform NAT in the cloud

Answer: C. The NAT configuration acts only on packets permitted by a referenced ACL. As a result, the ACL can permit packets destined for the Internet, performing NAT on those packets. The ACL also denies packets going to the Enterprise, meaning that the router does not apply NAT to those packets.

Answer: B. As for the correct answer, the process of routing a packet out a GRE tunnel interface triggers the GRE encapsulation action. As for the incorrect answers: There is no tunnel gre acl command. There is no IPsec tunnel interface. Finally, one answer refers to logic that would describe a router’s logic when determining whether to encapsulate a packet into an IPsec tunnel.