Q2. What is an incremental update, and how often is it sent out?

Q3. What is the routing algorithm used in OSPF?

Answer: The routing algorithm used in OSPF is the Dijkstra algorithm.

Q4. State one method by which a link-state routing protocol attempts to reduce the network overhead.

Answer: Link-state routing protocols reduce network overhead by sending only incremental updates, or periodic updates with a very long interval. The updates contain information about the links connecting local routers rather than route information that is calculated as part of the routing process.

Answer: Distance vector routing protocols naturally summarize at the NIC or major network boundary. They do this by following the first octet rule.

Q7. Give three reasons why RIPv1 has problems with working in a large network.

Answer: RIPv1 has problems working in a large network because of the following reasons:

Q8. What is the Dijkstra algorithm used for?

Q9. What is the destination address of the distance vector periodic update?

Answer: The destination address of the distance vector periodic update is 255.255.255.255 (the broadcast address).

Q10. State one major difference between a classful and classless routing protocol.

Answer: Major differences between a classful and classless routing protocol include these:

Q11. In the routing table, a field indicates the source of the routing information. If the field showed the letter C, what would this mean?

Answer: A field showing the letter C would mean that the network is directly connected.

Q12. In the routing table, how is the next logical hop indicated?

Q13. Cisco distinguishes between the routing and the switching function—what is the difference?

Answer: The routing function is how the router learns the logical topology of the network. It decides whether the datagram can be routed, which path to select if there is a choice, and to which outgoing interface to queue the datagram. It operates at Layer 3 of the OSI stack.
The switching function is the forwarding of the frame from the inbound interface to an outbound interface. It operates at Layer 2 of the OSI stack, not at Layer 3, like a router.
A LAN switch connects two or more LAN segments. It uses a table of MAC addresses to determine the segment on which a frame needs to be transmitted; if it is on the interface that the frame received, then the frame is dropped. The switch listens to all traffic on the interface, at Layer 2, while the router looks at only the MAC address of a multicast group of which it is a member, a broadcast, or its own individual MAC address. Switches operate at much higher speeds than routers and can support new functionality, such as virtual LANs.

Q14. State the two ways that an outgoing interface is selected as the preferred path.

Answer: An outgoing interface is selected for the following reasons:

Q15. What is administrative distance? 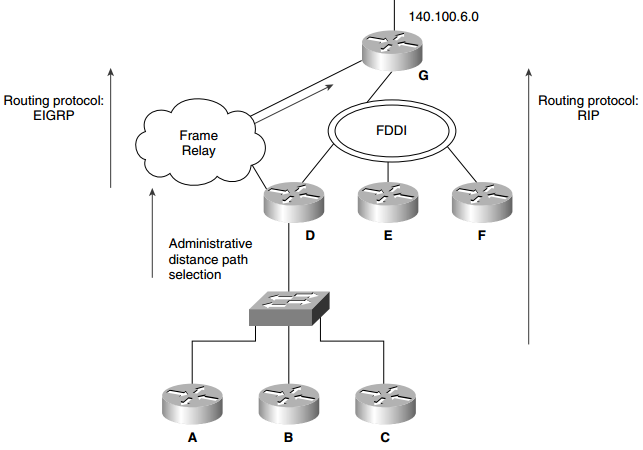 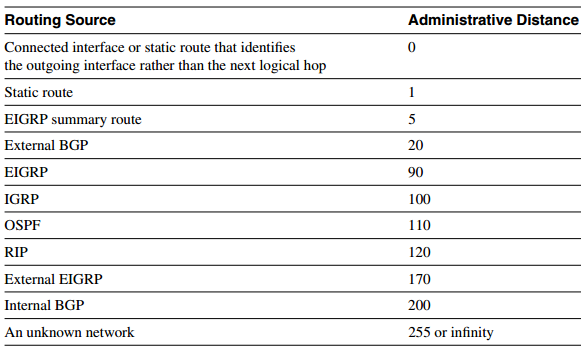 Q16. If IGRP has three paths to a remote network in which each path has an equal metric, what will happen?

Answer: If IGRP sees equal cost paths to a remote network, it will load balance between those paths by default.

Q17. Name the interior IP routing protocols that send the mask with the routing update.

Answer: The interior IP routing protocols that send the mask with the routing update are EIGRP, OSPF, IS-IS, and RIPv2.

Q18. Name the interior routing protocol that sends a routing update on a Cisco router every 30 seconds by default.

Answer: The routing protocol that sends a routing update every 30 seconds is RIP.

Q19. Does VLSM require a classful or classless routing protocol, and why?

Answer: VLSM requires a classless routing protocol because it needs the subnet mask to be sent with the update.

Q20. State one of the characteristics of a classful routing protocol.

Answer: The characteristics of a classful routing protocol are as follows:

Q21. A distance vector routing protocol uses the mechanism of poison reverse—what is this?

Answer: When the routing process suspects that a route in its routing table is no longer valid, it sets the metric so high for that route that it renders it unusable. This will be propagated in the routing updates to other routers.

Answer: Split horizon is a routing technique in which information about routes is prevented from exiting the router interface through which that information was received. Splithorizon updates are useful in preventing routing loops.

Q25. What is the command syntax to empty the Cisco routing table of all its routes?

Answer: The command syntax to empty the Cisco routing table of all its routes is as follows:
clear ip route *
(This command must be executed from the privileged EXEC level.)

Answer: 0.0.0.0 is used to signify the default route in the routing table.

Q28. What is the next logical hop in the routing table?