You are here: Home / Cisco / CCNP Route FAQ: Implementing and Tuning BGP for Use in Large Networks

CCNP Route FAQ: Implementing and Tuning BGP for Use in Large Networks

Q1. If a route reflector hears an update from a nonclient, what action will be taken?

Answer: If a route reflector hears an update from a nonclient, it will reflect the update to clients only.

Q2. In version 11.0 of the Cisco IOS, what method would be used to restrict routing information from being received or propagated?

Answer: Distribute lists would be used to restrict BGP-4 routing updates in version 11.0 of the Cisco IOS. Prefix lists became available to ISPs in 11.2 of the IOS and in 12.0 to the general public.

Q3. Explain the purpose and use of the command show ip prefix-list name [seq seq-number].

Answer: This command displays the entry prefix list with a given sequence number.

Q4. How and why would you redistribute static routes into BGP-4?

Answer: Static routes would be redistributed into BGP-4 with these commands:

The static routes are forwarded to the nonexistent interface null 0 to aggregate the routes to create a supernet. This is then redistributed to the BGP process instead of the hundreds of routes that exist. Because any route redistributed into BGP-4 must be in the IP routing table, this is a way of creating a supernet and having it redistributed.

A static route to null 0 is not needed if the network command is used and no address aggregation is performed.

Q5. Give the command that would change the weight attribute for the path to the next hop 192.16.5.3.

Q6. Why do route reflectors have to be fully meshed with IBGP-4? 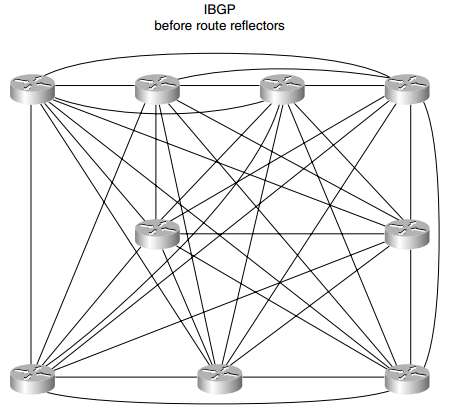 Q7. Why is filtering often required when redistributing BGP-4 into an IGP?

Answer: Filtering is often required when redistributing BGP-4 into an IGP because the routing tables can become overwhelmed by the number of routes that are imported.

Q8. What are the advantages of multihoming?

Answer: Multihoming allows for redundancy, which is important when the link is into the Internet and may well carry crucial business information for the company. Multihoming also increases performance by allowing the selection of the better paths.

Q9. What are the two most common forms of multihoming?

Answer: The most common forms of multihoming include these:

Q10. Which command will show the local preference and weight attribute values?

Answer: The command that shows the local preference and weight attribute values is show ip bgp.

Answer: IBGP-4 needs to be fully meshed because IBGP-4 has a fundamental rule that states that IBGP-4 will not propagate back into IBGP-4 a route that it has learned from IBGP-4. The reasoning is that this is the only way to prevent routing loops. If each router is connected to every other router (fully meshed), the updates come directly from the source, which removes the need for a router to propagate any updates that it has received.

Q12. How is a fully meshed network avoided in IBGP-4?

Answer: A fully meshed network can cause some problems to the routers because they have a great deal of information to deal with from every directly connected router. To avoid this intensity of bandwidth, CPU, and memory, an alternative is the configuration of route reflectors. Route reflectors allow the router to pass routes on to its peers.

Q13. What is the formula to determine the number of sessions needed in a fully meshed BGP-4 network?

Q14. Why does a fully meshed network in IBGP-4 cause problems?

Answer: A fully meshed network in IBGP-4 causes problems because the network has to accommodate a large number of TCP connections, and this can eat up memory, CPU, and eventually bandwidth.

Answer: Route reflectors have many benefits:

Q16. Can the next-hop-self option be used between EBGP-4 peers?

Answer: No, the next-hop-self option is used only with IBGP-4. It is used on a broadcast multiaccess link and ensures that the appropriate source address for the update is provided in the message header. In EBGP-4, this is not relevant because the next hop is always that of the EBGP-4 neighbor.

Q17. Explain the difference between a cluster-ID and an originator-ID.

Q19. If the ISP has provided a default route, how will the router within the autonomous system select the exit path in a multihomed environment?

Answer: The IGP within the autonomous system will use the metric associated with that routing protocol. The router running EIGRP, for example, will select the nearest router based on the composite metric of bandwidth and delay (by default).

Q20. What is a disadvantage of an autonomous system receiving full routing updates from all providers?

Answer: The disadvantage is that a great deal of network resources, such as memory and CPU, is required.

Q21. What is the danger of redistributing BGP-4 into the IGP?

Answer: The danger is that the autonomous system routers receiving the BGP-4 updates will be overwhelmed by the amount of routing information that they receive. This could result in an unstable network or even a network exhausted unto death.

Q22. What are the advantages of a fully meshed IBGP-4 network?

Answer: The advantage of a fully meshed network is that the network will receive full routing information from the directly connected peers. This means that the IGP does not need to carry routing information to the BGP-4 peers, and this means that no redistribution is necessary. This does not run the risk of overloading the IGP. It also means that the network will converge more quickly and that synchronization can be turned off, which will also improve performance.

Q23. In configuring a route reflector, how is the client configured?

Q24. What command is used to display the route reflector clients?

Answer: The show ip bgp neighbor command is used for this.

Q25. What commands are used to display the BGP-4 router ID that identifies the router that is sending the updates and peering with its neighbor?

Q26. Which command is used to display the AS path?

Answer: The command used to display the AS path is show ip bgp.