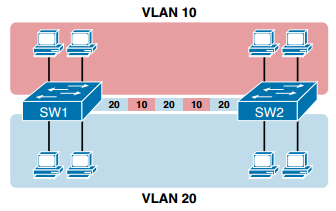 Q1. In a LAN, which of the following terms best equates to the term VLAN?
a. Collision domain
b. Broadcast domain
c. Subnet
d. Single switch
e. Trunk

Q2. Imagine a switch with three configured VLANs. How many IP subnets are required, assuming that all hosts in all VLANs want to use TCP/IP?
a. 0.
b. 1.
c. 2.
d. 3.
e. You can’t tell from the information provided.

Answer:
D. Although a subnet and a VLAN are not equivalent concepts, the devices in one VLAN are typically in the same IP subnet and vice versa.

Q3. Switch SW1 sends a frame to switch SW2 using 802.1Q trunking. Which of the answers describes how SW1 changes or adds to the Ethernet frame before forwarding the frame to SW2?
a. It inserts a 4-byte header and changes the MAC addresses.
b. It inserts a 4-byte header and does not change the MAC addresses.
c. It encapsulates the original frame behind an entirely new Ethernet header
d. None of the other answers is correct.

Q4. For an 802.1Q trunk between two Ethernet switches, which answer most accurately defines which frames do not include an 802.1Q header?
a. Frames in the native VLAN (only one)
b. Frames in extended VLANs
c. Frames in VLAN 1 (not configurable)
d. Frames in all native VLANs (multiple allowed)

Answer:
A. 802.1Q defines the native VLAN as one designated VLAN on a trunk for which the devices choose to not add an 802.1Q header for frames in that VLAN. The switches can set the native VLAN to any VLAN ID, but the switches should agree. The default native VLAN is VLAN 1. Note that only one such native VLAN is allowed on any one trunk; otherwise, that VLAN associated with untagged frames could not be discerned by the receiving switch.

Answer:
B and C. Only VTP server and client modes allow a switch to learn new information with VTP. Transparent and off modes give switches a couple of ways to effectively not use VTP; switches using both these modes will not update their configuration based on receiving a VTP message.

Q7. Which of the following answers list configuration information that VTP distributes? (Choose two answers.)
a. VLAN name
b. VLAN assigned to a switch port
c. Ports on which 802.1Q is enabled
d. VLAN ID

Answer:
D. Of the listed answers, VTP distributes only the VLAN ID and VLAN name. VTP does not distribute configuration that ties to specific ports on any one switch.