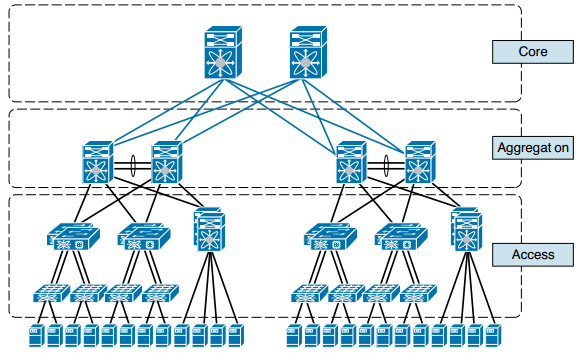 Answer: False. Nexus N9K-X9736PQ is designed for use in a Cisco ACI spine switch role.

Answer: B. The Cisco QSFP BiDi transceiver has two 20-Gbps channels, each transmitted and received simultaneously over two wavelengths on a single MMF strand.

Answer: C. Up to six simultaneously active fabric modules work together, delivering up to 1.32 Tbps per slot.

Q7. True or false? By upgrading SUP1 to the latest software and using the correct license, you can use FCoE with F2 cards.
a. True
b. False

Answer: A and B

Q14. Which Cisco Nexus technology enables two switches to look like one, from a Layer 2 perspective, allowing for all links to be active between the switch and host tiers?
a. Spanning tree
b. Virtual Port Channel (vPC)
c. MCLAG
d. Stacking

Q15. Which technology term refers to a network that uses layer 3 between scale out architecture in the Data Center?
a. Spanning tree
b. Virtual Port Channel (vPC)
c. VSS
d. Spine-leaf