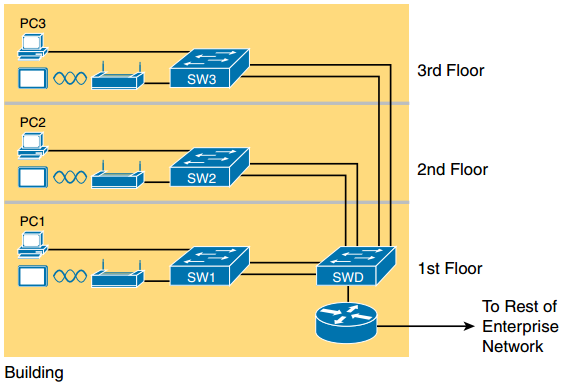 Q2. Which of the following Ethernet standards defines Gigabit Ethernet over UTP cabling?
a. 10GBASE-T.
b. 100BASE-T.
c. 1000BASE-T.
d. None of the other answers is correct.

Answer: D. The number before the word “BASE” defines the speed, in megabits per second (Mbps). 1000 Mbps equals 1 gigabit per second (1 Gbps). The “T” in the suffix implies twisted-pair or UTP cabling, so 1000BASE-T is the UTP-based Gigabit Ethernet standard name.

Q4. Each answer lists two types of devices used in a 100BASE-T network. If these devices were connected with UTP Ethernet cables, which pairs of devices would require a straight-through cable? (Choose three answers.)
a. PC and router
b. PC and switch
c. Hub and switch
d. Router and hub
e. Wireless access point (Ethernet port) and switch

Answer: B, D, and E. Routers, wireless access point Ethernet ports, and PC NICs all send using pins 1 and 2, whereas hubs and LAN switches transmit on pins 3 and 6. Straightthrough cables connect devices that use opposite pin pairs for sending, because the cable does not need to cross the pairs.

Q5. Which of the following is true about the CSMA/CD algorithm?
a. The algorithm never allows collisions to occur.
b. Collisions can happen, but the algorithm defines how the computers should notice a collision and how to recover.
c. The algorithm works with only two devices on the same Ethernet.
d. None of the other answers is correct.

Answer: B. NICs (and switch ports) use the carrier sense multiple access with collision detection (CSMA/CD) algorithm to implement half-duplex logic. While CSMA/CD attempts to avoid collisions, it also notices when collisions do occur, with rules about how the Ethernet nodes should stop sending, wait, and try again later.

Q6. Which of the following is true about the Ethernet FCS field?
a. Ethernet uses FCS for error recovery.
b. It is 2 bytes long.
c. It resides in the Ethernet trailer, not the Ethernet header.
d. It is used for encryption.

Answer: C. The 4-byte Ethernet FCS field, found in the Ethernet trailer, allows the receiving node to see what the sending node computed with a math formula that is a key part of the error-detection process. Note that Ethernet defines the process of detecting errors (error detection), but not error recovery.

Answer: B, C, and E. The preassigned universal MAC address, given to each Ethernet port when manufactured, breaks the address into two 3-byte halves. The first half is called the organizationally unique identifier (OUI), which the IEEE assigns to the company that builds the product as a unique hex number only to be used by that company.

Q8. Which of the following terms describe Ethernet addresses that can be used to send one frame that is delivered to multiple devices on the LAN? (Choose two answers.)
a. Burned-in address
b. Unicast address
c. Broadcast address
d. Multicast address