Q1. Why is it important to consider link capacities when designing redundancy?

Answer: The backup link should be able to handle the full traffic load normally placed on the primary link.

Q2. Why is designing redundancy in the core easier than at other layers?

Answer: Suboptimal routing should be easier to deal with because the devices in the network core should have full routing information.

Q3. If all the core routers are in one building, what is a natural way to provide redundancy?

Q4. How many links on a ring core can fail before at least one section of the core is isolated? 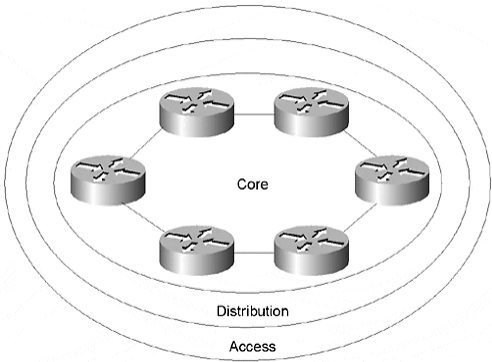 Q5. Do ring designs provide consistent hop count through the core network when a link fails?

Q8. Given a full mesh core with 25 routers, how many paths would there be through the network?

Q9. What method does a Cisco router use to differentiate between routes from two different routing protocols?

Q10. What is the first, and most important fac tor, used in deciding which route to use for a particular destination?

Q11. What mechanism in OSPF needs to be considered when it is being configured on a partial mesh network?

Q12. What are the possible techniques you can use in OSPF partial mesh network designs to get around this problem?

Q13. When dual homing a distribution layer or access layer router, what major problem should you be careful of?

Q14. When interconnecting the distribution or access layer router to provide redundancy, what issues should you be careful of?

Q15. What are the two main goals you must be careful to address when building redundancy into a network?

Answer: Redundant paths should only be used when the main path is down, unless they are engineered specifically for load sharing. Traffic shouldn’t be allowed, under any network conditions, to pass through links that aren’t designed to handle the full load of the primary link.