Q1. What are the two basic tools you can use to summarize routes (or hide destination details) in EIGRP?

Q2. How can you tell that a route is a summary when you look at the routing table?

Answer: It’s marked as a summary, and the next hop interface is null0.

Q3. What is the default administrative distance for a summary route? What is the problem with this?

Q4. What bounds a query?

Answer: Distribution lists and summarization because they limit knowledge of specific destinations.

Q5. How far beyond one of the possible query bounds will a query travel?

Answer: One hop, generally, or until a router that doesn’t have any information about that specific destination receives the query.

Q6. What is the primary advantage to summarizing between core routers rather than between the distribution layer and core?

Answer: The core routers will have enough information to make optimal routing decisions. 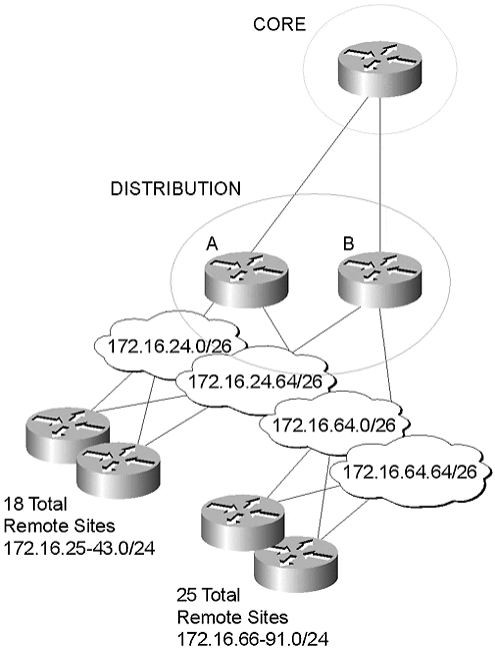 Figure: Summarization between the Distribution Layer and Core

Q7. How is it possible to “black hole” packets when summarizing destinations behind dual-homed remotes into the core?

Answer: Even if one of the distribution routers loses connectivity with one of the remotes, it will still advertise a summary covering the destinations available at the disconnected host.

Q8. Why should summarization be configured outbound from the distribution layer routers toward access layer routers at remote sites?

Q9. What is the most common problem with dual-homed remotes? What options are available to resolve it?

Answer: The remote routers appear to be transit paths to EIGRP. To resolve this, you should summarize routes outbound from the distribution layer toward the access layer routers.

Q10. What methods can be used to break a redistribution routing loop?

Answer: Distribute lists, route maps, prefix lists, setting the administrative distance on routes that are likely to produce loops, and using administrative tags in external routes to make the routes and block their redistribution.

Q11. Under what conditions is the administrative distance ignored between EIGRP and IGRP?

Answer: This happens when an IGRP route and an EIGRP route in the same AS compete for inclusion in the routing table.

Q12. What options do you have for generating a default route in EIGRP?

Answer: Either configuring a default network, or redistributing a 0.0.0.0/0 default route.

Q13. How can you prevent multiple parallel links within a network from all being used as transit paths?

Answer: By not running EIGRP on some of them; this is accomplished by using the passive-interface command.

Q14. What does EIGRP use to pace its packets on a link?

Answer: The bandwidth configured on the interface.