During routine maintenance, it is often desirable to access a device from another device. Cisco IOS Software provides a set of tools for this purpose. The following sections describe methods that you can use to access remote devices.

Establishing a Telnet or SSH Connection

Telnet or Secure Shell (SSH) applications are useful for connecting to remote devices. One way to obtain information about a remote network device is to connect to it using either the Telnet or SSH applications. Telnet and SSH are virtual terminal protocols that are part of the TCP/IP suite. The protocols allow connections and remote console sessions from one network device to one or more other remote devices. Figure 4-50 shows how to telnet to another device. Telnet on Cisco routers varies slightly from Telnet on most Cisco Catalyst switches.

To log on to a host that supports Telnet, use the telnet EXEC command:

Figure 4-50 Telneting to Another Device

To start an encrypted session with a remote networking device, use the ssh user EXEC command:

Use the show sessions command on the originating router or switch to verify Telnet connectivity and to display a list of hosts to which a connection has been established. This command displays the host name, IP address, byte count, amount of time the device has been idle, and connection name assigned to the session. If multiple sessions are in progress, the asterisk (*) indicates which was the last session and to which session the user will return to if the Enter key is pressed.

Use the show users command to learn whether the console port is active and to list all active Telnet sessions with the IP address or IP alias of the originating host on the local device. In the show users output, the “con” line represents the local console and the “vty” line represents a remote connection. The “11” next to the vty value in Figure 4-51 indicates the vty line number, not its port number. If there are multiple users, the asterisk (*) denotes the current terminal session user.

To display the status of SSH server connections, use the show ssh command in privileged EXEC mode, as shown in Example 4-18.

Suspending and Resuming a Telnet Session

After connecting to a remote device, you might want to access a local device without terminating the Telnet session. Telnet allows temporary suspension and resumption of a remote session.

Figure 4-52 shows a Telnet session from Router A to Router B. The key sequence shown is entered to suspend the session. The output indicates that the Telnet session has been suspended.

To suspend a Telnet session and escape from the remote target system back to a local switch or router, use the command Ctrl-Shift-6 or Ctrl-^ (depending on your keyboard); then follow either command by the character x.
The methods to reestablish a suspended Telnet session are as follows:

You can end a Telnet session on a Cisco device by using the exit, logout, disconnect, or clear command. Figure 4-53 illustrates closing a Telnet connection.

You can close a Telnet session on a Cisco network device by using one of the following methods:

Detailed information about how these tools operate are as follows: 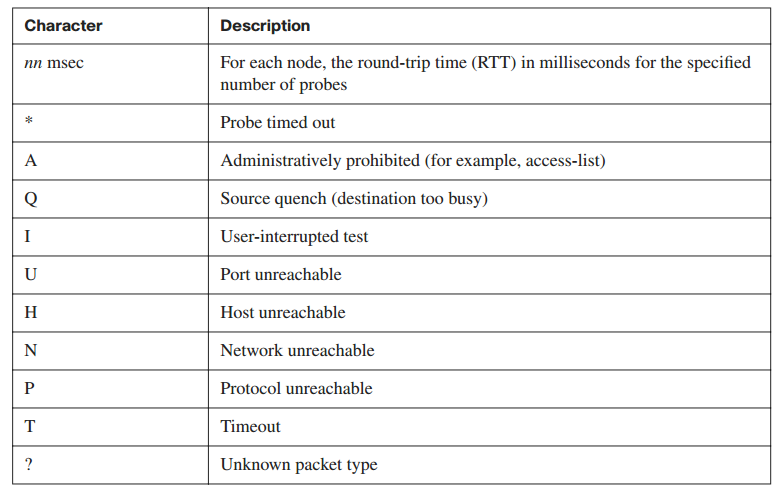 NOTE If IP domain name lookup is enabled, the router will attempt to reconcile each IP address to a name, which can cause the traceroute command to slow down.