You are here: Home / Uncategorized / PUBG Guns Guide, Which Are The Best PUBG Guns?

PUBG is among the most played Esports recently. Go grab your favorite PUBG guns and start doing the most exciting thing in the game, killing.

One of the most diverse features in the game is PUBG guns. PUBG is a popular Esports which requires the element of competition and survival to emerge on top of everyone. The genre of the game is battle royale. You either need to kill other players or hide yourself to become the last surviving player in the battlefield.

But I have to tell you that killing is fun, that is the most entertaining aspect of the game. One player eliminated means 1 better chance for yourself to become #1. So why don’t you grab some PUBG top guns and start killing already? Hiding is only for the weak!

Let’s start with the standard PUBG guns list you may need to know.

PUBG guns are divided into many categories. There are good ones as well as bad ones. You may find your favorites as PUBG best guns. If you can pick up an AWM or M249, it would be your lucky match. However, if you are not fortunate enough and end up with only pistols, deal with it. Also, please note that PUBG also offers helmets and armors to offer protection against PUBG guns damage. They offer 30%, 40%, and 55% damage reduction. When you check the PUBG guns list, you should consider that the damage is against unprotected players. Also, some PUBG guns guide offer weapon damage against protections. 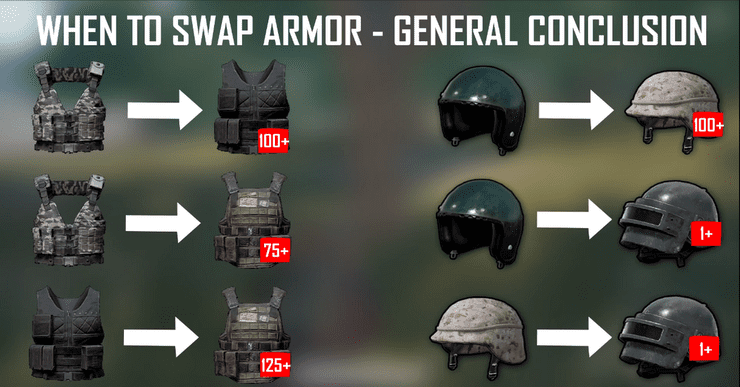 Armor and Helmet reduce the damage you receive from bullets

To go more into details, we provide you with some pros and cons of the PUBG best guns list. They are sniper rifles, assault rifles, shotguns, and pistols.

Please note that sniper rifles deal 2.5 times more damage to the head area. they do 100% damage to the upper body and 5% less damage on the lower part of the body. For example, one AWM hit to the head instantly kills off one player regardless of body armor or helmet. It deals 118.1 damage from the distance of 10m, exceeding the maximum HP of one player. Even from the distance of 1000m, it will score a kill with 106.3 damage. However, most PUBG guns guide would advise you to hit the shot within under 100m range for the best accuracy.

AWM is at the top of the strongest PUBG guns

For that reason, an AWM is considered one of the PUBG best guns. It helps you secure a kill from a long distance. However, other PUBG sniper guns deal damage depending on many factors. Their damage normally can secure a kill with a shot on the head. However, if the shot player equips a level 3 helmet, one shot from SCAR-L will only deal 45.4 damage even from 0.1m.

Here we have the PUBG guns list of assault rifles. It varies from SCAR-L, Groza to the less known QBZ95 or Beryl M762. 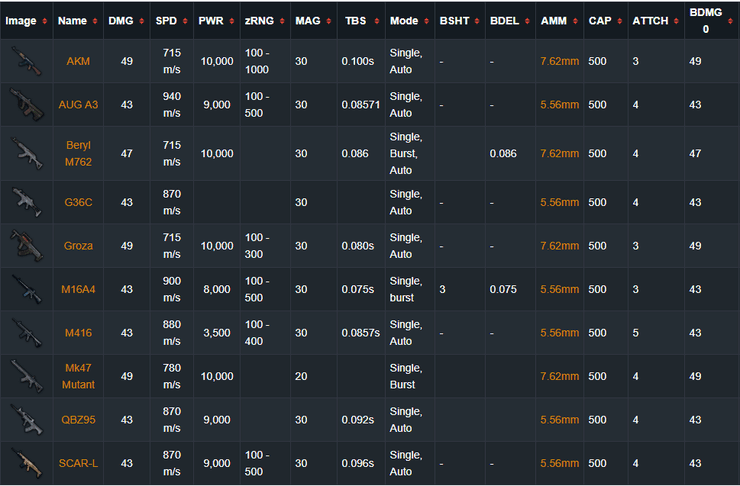 List of the assault rifles you need to know

Assault rifles also deal more damage when hitting heads and full damage on the upper body. They have a good standing in PUBG guns list thanks to their availability and easy-to-use nature. Assault rifles do not often instantly kill unless you manage to land a shot on the head of an unprotected player. However, due to the fact that assault rifles can fire off many bullets quickly, they are suitable for engaging in close combat. Assaults rifles are considered the best PUBG guns when the border closes in.

Shotguns are best when engaging in close combat. As we know, shotguns are weak in damage but fire off a dozen of bullet every shot. They also offer the slowest fire rate, only faster than an AWM.

Shotguns are a great weapon when engaging in close range

However, one plus point of the gun is that you can reload each bullet even when trying to fire. Shotguns are the PUBG best guns when you are stuck in a house against another player. In that closed environment, you have a higher chance to hit your bullets with shotguns. Most PUBG guns guide will advise you to use shotguns only in apartments or deserted houses.

Pistol are close range weapons which are obviously less useful than rifles. They are often an alternative choice when you can’t manage to pick up good loots. Well, when the game is rough, you have to deal with it. Though they are not the PUBG best guns, pistols are still better than melee weapons.

Pistols are pretty available everywhere in the game

Pistols deal low damage and have less ammo capacity than rifles. They have a quick fire rate and are relatively light. The weapon is best for close range combat or in a chasing situation as you can run pretty fast with it. In case you just land on some deserted schools and all the PUBG best guns you can grab were pistols, they are a great choice to go for. Please note that pistols can only one-shot kill with a shot in the unprotected head in close range. So, try not to be too picky by going for headshots or just avoid fighting with this low range weapon.

So, what are the best PUBG guns?

From the experience of many players, they concluded here are among the best PUBG guns 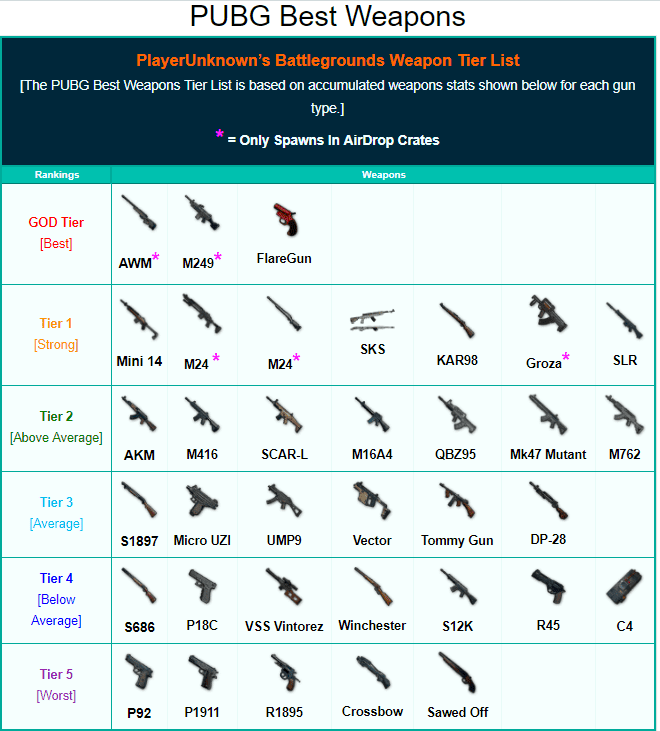 PUBG best guns are listed as tiers, AWM sits comfortably at the top

PUBG guns are diverse and abundant in the game, making it more fun to play. Grab your favorite guns in the PUBG guns list and start your killing streak in the game. It is a hell of fun and entertainment.