You are here: Home / PUBG / Guide For The Best Weapon Loadouts In PUBG Squad Mode

There are a vast array of weapons in PUBG Mobile, each with their own unique quirk and characteristic. Even if you are into stealth and avoid confrontations, picking up the right weapon can still be a crucial factor between a win and a loss.

However, there is a problem that one must overcome when assembling weapons – it can be very tricky to know what to pick up – or how to build an array of weapon that is able to complement one another in various scenarios.

There are too many choices for weaponry in PUBG Mobile

Generally, you would want to get two main weapons which cover different objective than each other. However, if the situation calls for it, you would need a combo of weapon that is suited for a single purpose.

Out guide will list out four of the best loadouts for every purpose in PUBG – with them, you can pretty much deal with every situation that the game throws at you.

This setup focuses on high damage high accuracy guns that are suitable for just about any situation that you could get stuck in. Having two assault rifles would be deadly at mid-range fights, which is the majority of the fights in this game

The AK has always been a great choice in any FPS game.

A fully modded M416 is probably the easiest weapon to use in this game – with amazing damage and accuracy at all ranges. The AKM is for close-quarter combat and inside buildings, as it deals absolutely terrifying damage at close range.

This loadout is best used in squad mode against multiple enemies, as its high magazine and damage would suppress the enemies long enough for your squad to close in. 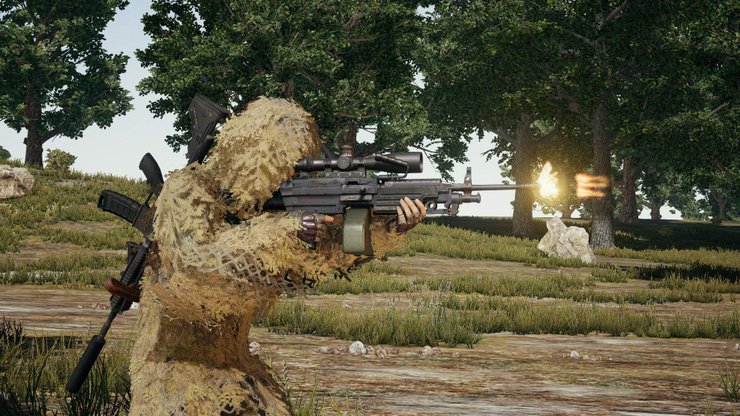 The M249 is pretty much the best gun in the game

The M249’s terrifying fire rate and power is the top choice for this build. However, as the gun is rather difficult to get, a regular Assault Rifle like M416 or SCAR-L would have to suffice.

If the enemies are closing in on your position, the AKM and S12K would make short work of even level 3 armor – as their superiority in close range combat is unparalleled.

Sometimes you just have to be more creative

Landing on building/facilities and camping in hot zones might require some creative thinking – as the usual assault rifle just can’t cut it sometimes.

Above are various options for both weapon slots. The UMP-9 and AKM are pretty common drops – they are incredibly effective at indoor combat. About spraying, however, the Vector is the best – with its ability to spray with precision.

The S686 and S12K will be an alternative option when you are low on normal ammo. The shotguns are a little bit trickier to use, as you have to angle the body shot so that all the pellets land on your enemy.

The gun with the highest bullet damage in the game

This sniper loadout would have you picking up enemies from long range quickly, stealthily and accurately

To make the sniper rifles or DMR work, you would need to find a decent scope. These weapons are great at picking out the enemies at long range – and if push comes to shove, you would have the M16A4 and UMP9 as a last resort.