When a Cisco router boots, it performs a series of steps in a particular order. At several points during the process, the router makes a decision about the next step to take. Knowledge of the boot sequence can be of great help when troubleshooting a Cisco router and also when adjusting its configuration. The following sections describe each step in the router boot sequence.

The sequence of events that occurs during the power-up (boot) process of a router is important. Knowledge of this sequence aids in accomplishing operational tasks and troubleshooting router problems.

The major internal components of a Cisco router include the interfaces, RAM, ROM, flash memory, NVRAM, and the configuration register. The major components of a router are shown in Figure 6-5. Most of these components are hardware, as follows:

As shown in Figure 6-6, three major areas of microcode are generally contained in ROM. 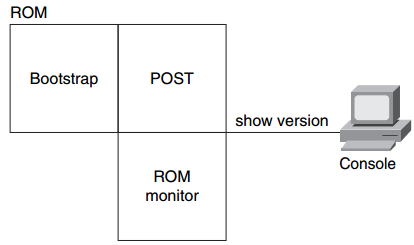 The functions of these areas are as follows:

NOTE Depending on the specific Cisco router platform, the components listed can be stored in flash memory or in bootstrap memory to allow a field upgrade to later versions.

Figure 6-7 IOS Is Loaded into RAM 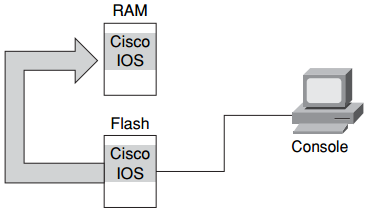 AutoInstall attempts to download a configuration from a TFTP server. AutoInstall requires a connection to the network and a previously configured TFTP server to respond to the download request.

The setup utility prompts a user at the console for specific configuration information to create a basic initial configuration on the router. Figure 6-8 shows how setup will copy the configuration file into running memory as well as NVRAM.

If there is a message at the top indicating how much nonvolatile memory is being used, the startup configuration file from NVRAM is being displayed. This is shown in Figure 6-9.

You can change the default configuration register setting with the config-register global configuration command, as shown in Example 6-7.

The guidelines for changing the boot field are as follows:

In Example 6-6, the show version command indicates that the current configuration register setting of 0x2104 will be used during the next router reload.

The show flash command displays the contents of flash memory, including the image file names and sizes. This is illustrated in Example 6-8.