One of the remarkable features about VLAN segmentation with a Layer 2 switch is that the traffic from one VLAN remains separate from all other VLANs. Quite often, however, devices need to communicate or access services with another device that is in another VLAN. Because the VLANs are in separate networks (broadcast domains), you need a device that is capable of
routing in between networks. In other words, you need a router or a Layer 3 switch.

Each broadcast domain that is created in a switch is associated with an IP subnet. Devices in the same VLAN share the same subnet so they can use IP to communicate with each other. Routers and Layer 2 switches route between the logical subnets to allow traffic from one VLAN to reach another VLAN. This is known as interVLAN routing.

Router on a Stick
One method of routing between VLANs is to use a router. Because each VLAN is associated with its own subnet, a router needs to have an interface for each VLAN (IP subnet) so it can route in between them. This can become a costly and unscalable solution if you have a large number of VLANs in your switched network.

The most effective manner of using a router to perform interVLAN routing is something commonly referred to as “router on a stick.” The gist behind this solution is to produce a configuration in which the router can see all the VLAN traffic over a single link. In other words, the router trunks to a switch over a single link, hence the term “router on a stick.” Despite the router being able to see all the VLAN traffic, however, it still requires interfaces with IP subnets assigned to them to route in between these VLANs. The answer for this is something called subinterfaces.

To create the subinterfaces, you navigate in the IOS as you would to a physical interface; however, you add a decimal followed by the logical subinterface number. The IOS prompt changes to reflect Router(config-subif)#, signifying you are in the subinterface configuration mode, as demonstrated here:

After you create a subinterface for a VLAN on your Fast Ethernet or Gigabit interface (remember trunks must be at least 100Mbps), you can assign the IP address to the interface for that VLAN’s subnet. This IP address is the default gateway for all the devices in that VLAN because the default gateway is the IP address to which devices send their traffic destined for another network. To assign the VLAN to each subinterface, you must use the encapsulation command and signify which method of VLAN tagging you have configured on the trunk, followed by the VLAN assigned to that subinterface.

EXAM ALERT
To use a router-on-a-stick solution for interVLAN routing, you must trunk between the router and the switch. In addition, the interface must be at least Fast Ethernet and contain subinterfaces for each VLAN.

For instance, given a scenario similar to Figure 15.7, you would create a subinterface in the router for each VLAN. The IP address assigned to these interfaces acts at the default gateway for the PCs. When the computer in VLAN 1 wants to send traffic to the computer in VLAN 3, it sends the traffic over the switch trunks to the router that is to route and re-encapsulate the ethernet frame to have a VLAN ID of VLAN 3. When the switches receive the frame, they forward it out of only access ports that have VLAN 3 assigned to it. 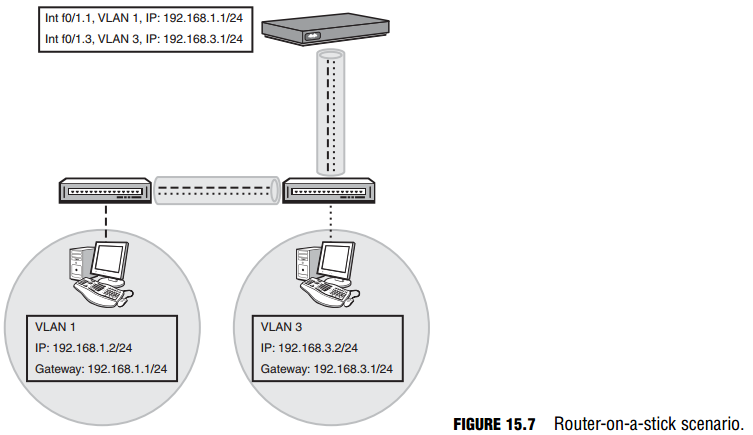 The router configuration for Figure 15.7 would look like the following, assuming you are using 802.1q trunks:

To configure the switched virtual interfaces, you simply navigate to the VLAN interface number that matches your VLAN and assign it an IP address. For example, given the similar interVLAN scenario in Figure 15.8, you are using the Layer 3 switch to route in between the two VLANs. You just need to create the VLAN interfaces and assign the IP addresses, as demonstrated in the following configuration: 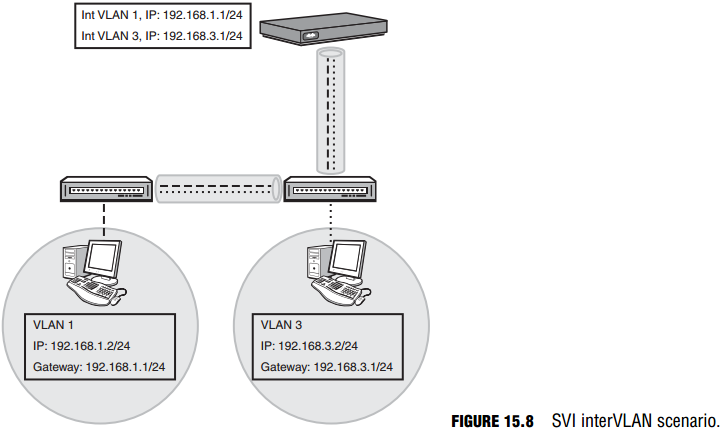 We’ve established earlier in this chapter that access ports are ports that only have one VLAN assigned to them. That is typically the case unless you want to assign Voice VLANs, sometimes referred to as auxiliary VLANs, to an interface. In these cases, the access VLAN is actually the VLAN assigned for normal data and the voice VLAN is a separate VLAN for Voice over IP (VoIP) from a Cisco IP Phone.

Cisco IP Phones, such as the 7960, connect to switches and send the IP traffic that contains the voice payloads over the LAN and eventually to the gateway device that connects it to the traditional voice network. In addition to having the responsibility of breaking down speech and sound into data packets, these IP Phones also have an internal LAN switch with a data port on
them that you can use to connect your PC or other end-device to minimize unnecessary cabling and the amount of ports needed on the Catalyst switch.

By configuring the switch port connected to these phones, you have the ability to logically separate the voice traffic from the phone and the data traffic traversing through the phone’s internal switch into separate broadcast domains. This is useful for management purposes because you can essentially configure all IP Phones to be in their own subnet because the phones will
be assigned to the same voice VLAN. But even more important than that, you can configure the Catalyst switch to use QoS and instruct the IP Phone (using CDP no less) to classify the voice traffic differently from the data. By giving the voice traffic higher priority over the data traffic, you are minimizing the possibility that your data traffic will impede the voice packets from reaching their destination (at least from the Catalyst switch) and deteriorate voice quality. To illustrate the process entailed with Cisco IP Phones and voice VLANs, refer to Figure 15.9.

To configure a voice VLAN, the syntax is relatively the same as access VLANs except it uses the keyword voice instead of access. For instance, assuming the IP Phone in Figure 15.9 was connected to the Catalyst switch’s Fast Ethernet 0/20 interface, the configuration would look like the following:

I am sure by this point you recognize the usefulness of segmenting your LAN into separate broadcast domains using VLANs. Unfortunately, this valuable Layer 2 technology is not without its share of problems that can (and typically do) arise when implementing VLANs in a switched environment. By logically narrowing down the possible causes based upon the symptoms and using the verification commands learned in this chapter, you should be able to tackle the majority of anomalies that occur in a small-to-medium sized switched network with VLANs.

One of the most common symptoms that may arise when implementing VLANs is the inability to have end-devices able to communicate with each other. The list of possible causes for this can be endless; however, the following questions and solutions will address the most prevalent problems:

The next troubleshooting scenario we will look at revolves around the possibility that output of the show vlan command reveals that your VLANs in your switch are missing or are inconsistent with what you originally configured in the rest of your switches: