You are here: Home / PUBG / Exclusive Twitch Prime Loot From The PUBG Mobile And Amazon Collaboration

Twitch Prime loot has such new items from the collaboration of Tencent Games and Amazon. These exclusive items will blow your mind and promisingly are such stunning ones. As in their announcement before, the exclusive loot is now available. So, players should start to grab interesting PUBG Mobile items now because it may just appear this time only.

What items can you get

The deal that Twitch Prime offers will also include a skin for the Kar98K sniper (named The Blood Oath skin). The skin will appear in the theme of black and red with a golden bolt.

Notably, you will get the Black Magma Parachute, which is decorated with a face with a pair of goggles on it. Certainly, there will be more black and red hues on the chute. 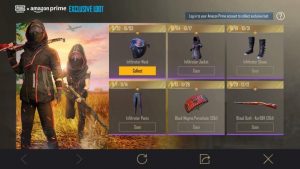