You are here: Home / MOBILE GAMES / Digimon ReArise Is Out Now For Mobile Ahead Of Schedule

Digimon ReArise was expected to launch on the 21st of October, but now, the game has arrived on both Google Play and the App Store ahead of schedule!

We first reported on Digimon ReArise from Bandai Namco when its global version was put up for pre-registration at the beginning of August. At the time, it was expected to launch on the 21st of October, but it seems that things have gone a bit ahead of schedule. The game is now available globally for both Android and iOS. Check out its trailer below:

The story revolves around an aspiring Digimon tamer who is in danger when a mysterious threat known only as “Spirals” invades their world. Now, our young protagonist must team up with the Digimon Herissmon to investigate the matter and restore things to how they should be.

The combat will be a real-time 5v5 affair, and it seems pretty straightforward and flashy. Aside from the main story, there will be Clash Battles to tackle. Here, you will be put in battles against some extra-powerful Digimon, and if you manage to defeat them, you will have the chance to evolve your own Digimon. 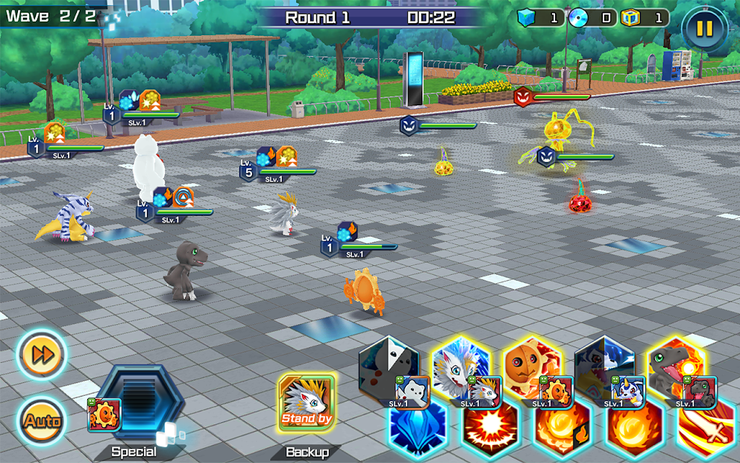 The combat is a real-time 5v5 affair

The real challenge, though, is competing with other players for the top spot in the Battle Park. This is basically a season system that grants players weekly rewards based on their rank. Additionally, when you get tired of all the fighting, you can always go to the DigiTown to participate in all sorts of other activities.

As we wrote in our previous article, all those who participated in the pre-registration phase will now receive several exclusive in-game prizes including currency, materials, and a DigiEgg that contains a Pumpkinmon.  A limited-time login bonus and summoning event is also going on and will last until the 1st of November, during which you might be able to get the pre-evolved forms of Sakuyamon and WarGreymon if you are lucky.

If you are interested in taking Digimon ReArise out for a spin, you can find it available for download on both Google Play and the App Store right now.