Q1. What are the different aspects, or “subdimensions,” of management interoperability? 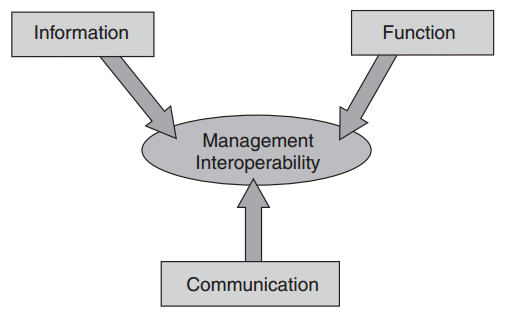 Q2. Why is a management protocol needed between managers and agents, and why isn’t mere connectivity between them sufficient?

Answer: It is possible for people to hear each other but not understand each other. In the same fashion, mere connectivity would allow managers and agents to send messages to each other but not to understand and know how to interpret those messages or what to do in response. A management protocol is needed to define the “rules of conversation” between managers and agents, including the syntax and meaning of messages to be exchanged.

Q3. Why is it important for interoperability that a manager understand the functions provided by an agent?

Answer: If a manager did not understand the functions provided by an agent, the manager might get unexpected return codes when sending a request or, worse, not understand the effects of an operation. Either situation could lead to unintended consequences. For example, a manager might send a group of commands assuming that they would be treated as a “transaction,” but the agent might support only “best effort” semantics. If an error occurred, the manager might assume that none of the commands had taken effect, whereas some of them actually did, and it would be the manager’s responsibility to undo their effects.

Q4. Assume that you need to manage a network that contains three different types of devices. To avoid dependence on a particular vendor, you have two suppliers for each type of device. Explain some of the ways in which management standards are important in this situation.

Answer: Without management standards, chances are, you must support six different types of interfaces for your network. If you develop tools or scripts, you need to be well versed in six interfaces instead of only one. In addition, it will take you longer to develop them. Likewise, network management suppliers incur higher costs that they will want to recover from their customers—in other words, from you.

Q5. What does TMN stand for?

Q6. Would the layers of the TMN reference model apply to application management? Why or why not?

Q8. If an upgrade in a network is not carefully planned, service outages can occur. Name three ways in which upgrade operations might impact network availability.

Answer: Disconnecting and reconnecting physical cabling, during which equipment is offline; loading a new software image (such as a new operating system revision) that might require an equipment reboot, during which it is unavailable; and downloading and activating an updated configuration that resembles the configuration that was in place before the upgrade. All of these can lead to impact on network availability that can be avoided or minimized with proper upgrade planning as part of the management life cycle of the underlying network. For example, services and network traffic need to be switched to other parts of the network before maintenance and upgrade operations are performed.

Q9. Give three reasons why cookie-cutter procedures can be useful in network management.

Answer: These reasons include the following: (1) Greater efficiency in performing a given repetitive task. The efficiency comes from eliminating the step of repeatedly figuring out how to perform the task. (2) Easier troubleshooting. When problems are encountered with services, it is clear what configurations are supposed to look like, making it easier to spot problem areas. (3) Key personnel are freed up for more advanced tasks instead of being bogged down by routine tasks.

Answer: This is an open-ended question with many aspects to consider. In the example, potential problems can exist regarding whose responsibility it is to forecast demand for voice services and plan network upgrades in a timely manner. Another problem is the efficiency with which a voice problem would be resolved because this could involve all three organizations (group 2 to take the call, group 1 to determine what’s wrong, and group 3 to address the problem and fix it). Generally, it helps to identify key scenarios and play through them, asking whether responsibilities in those scenarios are clearly defined, and whether the number of parties involved and exchanges between them could be reduced.