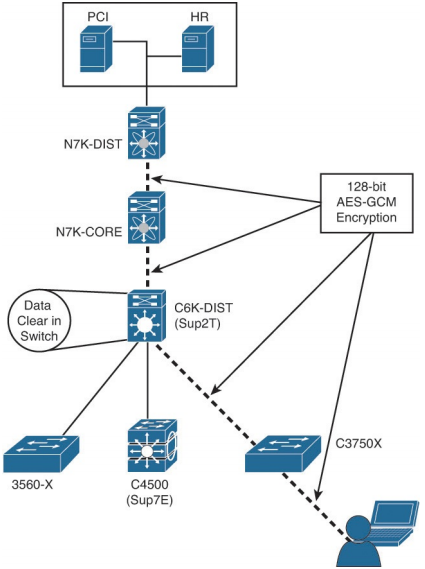 Q1. What is a security group tag?
a. A luggage tag applied by TSA workers at airports to flag bags as they enter security checkpoints
b. An internal assignment used in ISE to represent a local copy of an Active Directory group
c. A 16-bit value that represents the context of a user and/or a device
d. An RFID tag used to identify a wireless asset to ISE

Answer: C. A security group tag (SGT) is a 16-bit value that ISE assigns to the user’s or endpoint’s session upon login. The SGT can represent the context of the user and device and can be carried in the Layer-2 frame or communicated through SXP. The SGT is assigned at ingress and enforced upon egress.

Answer: B. SGTs are considered an authorization result in the ISE administrative GUI. They are defined within the policy elements section of the GUI as an authorization result. They also can be defined from the Policy > Security Group Access > Egress Policy screens by clicking on Configure > Create New Security Group; however, that method was never discussed in the text of this chapter.

Answer: A, B, D. To use the SGT, the tag needs to be assigned (known as classification). This can happen dynamically and be downloaded as the result of an ISE authorization; they also can be assigned manually at the port level or even mapped to IP addresses and downloaded to SGT-capable devices.

Q4. True or False? An SGT-capable device can automatically map traffic to an SGT based on the VLAN of that traffic.
a. True
b. False

Answer: A. Although that gear might not support the classification and transport natively, it might be capable of assigning different VLANs or IP addresses per authorization result. A distribution layer device may have the ability to map subnets and VLANs and assign all source IP addresses from the subnet or VLAN to a specific tag.

Answer: D. Cisco has developed a peering protocol (similar to BGP or LDP) to enable devices to communicate their database of IP-address-to-SGT mappings to one another. This peering protocol is called Security Group Exchange Protocol (SXP).

Q6. What are two modes of SXP peers?
a. Speaker
b. SGT-Reflector
c. Listener
d. SGT-Sender

Answer: A, C. Every SXP peer session has a speaker and listener. A speaker sends the mappings of IP addresses to SGTs. The listener receives those updates and records them. A peer can be configured for both roles simultaneously and can have numerous peers.

Answer: A. Native tagging of SGTs includes the 16-bit tag as a portion of the Cisco Metadata field of the Layer-2 Ethernet frame. It also can be included as part of an IPSec link.

Answer: B. The tag can be encrypted within a MACSec encrypted link between network infrastructure devices or even an IPSec connection. The endpoint is never aware of the tag that has been assigned, so enabling downlink MACSec between the endpoint and the switch will not help.

Q9. What are two methods of enforcement with SGTs?
a. SG-ACLs on switches.
b. SG-ACLs on routers.
c. SG-Firewalls.
d. SG-Appliances.
e. SGTs are not enforced.