Q1. What is the one central trusted introducer called?
a. Identity certificate
b. RSA algorithm
c. Certificate authority
d. X.500 distinguished name
e. None of these answers are correct. 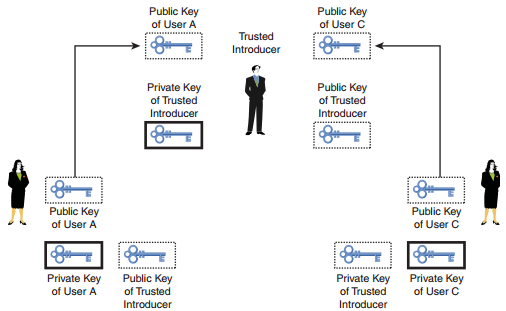 Figure: Showing Where the Trusted Introducer Is (User B)

Q3. Which of the following is something that can cause issues in a PKI system?
a. Synchronized time
b. Variable time
c. Unsynchronized time
d. Manually configured time
e. None of these answers are correct.

Q4. The SCEP interface on a Cisco IOS Software Certificate Server is enabled with what command?
a. ip scep server
b. set scep server enable
c. ip http server
d. crypto server scep
e. None of these answers are correct.

Answer: A and D

Q8. What information does the client send to the CA during the enrollment process?
a. IP address
b. Client’s private key
c. Client’s public key
d. Name of device

Q9. By default, what will the IKE process on Cisco IOS Software routers accept if signed by its locally defined trustpoint CA?
a. A client IP address
b. Client’s private key
c. Any valid certificate
d. A new CRL

Q10. _____ is where existing point-to-point key exchanges can be tied together to soften the public key distribution problem.

Q14. Digital signatures are commonly used by many authentication protocols for traffic running over _____ networks.

Q15. To participate in the PKI system, all end users must _____ with the CA, which involves a process in which they submit their public key and their name to the CA.

Q16. An _____ is a piece of information that binds a PKI member’s name to its public key and puts it into a standard format.

Q17. The Cisco IOS Software Certificate Server stores its database on the local _____ of the router.