In general, link redundancy is a good thing, but it can also lead to some network problems. You might want to manually control the route taken by some or all of your traffic to provide a predictable and deterministic traffic flow. Path control can prevent suboptimal routing, ensure path availability, provide optimized performance for specific applications, and provide load sharing among various paths.

A good path control strategy understands that traffic is bidirectional and considers both inbound and outbound traffic. Asymmetric routing—where traffic exits via one link and enters via another—is not inherently bad. But you might need to minimize it when using stateful devices such as firewalls, or with sensitive applications such as voice. A good routing plan requires a good design. Design IP addresses that can be summarized and use redistribution and passive interfaces appropriately.

An offset-list is a way to increase the metric of routes. You might do this to cause a router to choose what it would normally consider a less desirable path, or to load balance over paths that would normally have unequal methods. The command uses an access list, so you can also use this command to send a subset of traffic over a different path. Historically, offset-lists were used with RIP because it only looked at hop count, and thus might choose a slow path that had a lower hop count than a fast path. Only RIP and EIGRP support offset-lists.

Configure an offset-list with the command offset-list { access-list-number | access-list-name} { in | out} offset [interfacetype interface-number]. This command is given in router configuration mode. The offset amount is added to the hop count in RIP and is added to the delay value in EIGRP. Be careful when changing an EIGRP metric value and test thoroughly. The following example shows a delay value of 2000 added to the EIGRP metric of the two routes permitted in access list Offset, when they are advertised in interface FastEthernet 0/0.

You can configure more than one offset-list. If you specify an interface, the offset-list is considered an extended offset-list
and has precedence over a normal offset-list.

IP SLA is a feature that enables a Cisco router or switch to simulate specific types of traffic and send it either to an IP address or to a receiver, called a “responder.” IP SLA probes can simulate various types of traffic, such as HTTP, FTP, DHCP, UDP jitter, UDP echo, HTTP, TCP connect, ICMP echo, ICMP path echo, ICMP path jitter, and DNS, and can report statistics such as path jitter. It has highly granular application configuration options such as TCP/UDP port numbers, TOS byte, and IP prefix bits. With IP SLA you can measure network performance and host reachability. This is useful for path control because it enables you to switch to a backup path if network performance on the primary path degrades, or if a link failure occurs someplace in the primary path.

To use IP SLA for path control, you must

The destination can be any trusted device that responds to the traffic you send. To use IP SLA for bringing up a backup link, choose a destination that will reflect problems in the ISP’s network. One benefit of using a Cisco device as the responder is that it can add time stamps to help measure latency and jitter. These time stamps take into account the device processing time so that the measurement reflects only network latency. The configuration of a Cisco responder is simple.
Use the global command ip sla responder.

Figure 5-1 shows a network with two connections to the Internet, one primary and one backup. The edge router has a static default route pointing to each provider. 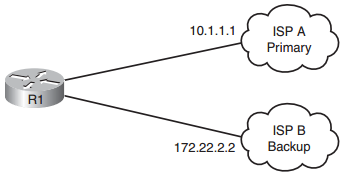 In the following example, router R1 is configured to conditionally announce a default route based on the IP SLA probe response. Two IP SLA monitor sessions are configured to send a ping every 10 seconds to a DNS server within each ISP’s network. A separate tracking object tracks reachability to each server. The two default route statements tell the router to give the primary route an administrative distance of 2 if the tracked object is reachable. The backup route is assigned an administrative distance of 3 if its tracked object is reachable.

Additionally, you can combine IP SLA tracking with policy-based routing to provide redundancy for specific traffic types on a per-interface basis. For instance, after an access list permitting the interesting traffic is specified, a route-map such as the following can be configured. In the example route-map, x.x.x.x and y.y.y.y represent different next hops to send the traffic specified in ACL 101. The track 1 and track 2 keywords tie the configuration back to the SLA groups configured in the previous example. You then apply the policy map under the incoming interfaces just as with normal policy routing.

Normal IP routing chooses a path based on the destination IP address. Policy-based routing (PBR) lets you route traffic based on other variables. It uses a route-map to match traffic and then sets either a next-hop address or an exit interface. It can also mark the traffic that it policy routes. Any traffic not matched in the route-map is routed normally. Policy-based routing can be applied both to traffic entering the router and to traffic originated by the router.

Use the following steps to configure policy-based routing:

Some typical attributes to match in the route map include source or destination address with an access list and packet length. If no match criteria are specified, all packets are considered a match.

You can choose to set IP precedence, but the most typical setting determines how the traffic leaves the router. There are
four ways to do this. If there are multiple set statements, the router evaluates them in this order: