Answer: E. OSPF creates a Type 2 LSA for a subnet when the router interface connected to the subnet calls for the election of a designated router (DR), and at least two routers have discovered each other and elected a DR. Then, the DR creates and floods the Type 2 LSA. IOS by default does not elect a DR on point-to-point topologies. It does on router LAN interfaces. One answer states that one router only exists in the subnet, so it does not actually find a second router and elect a DR. In the other case, a DR and BDR have been elected, but the router described in the answer is the BDR, not the DR. So, none of the other answers is correct.

Q3. A verification plan shows a network diagram with branch office Routers B1 through B100, plus two ABRs, ABR1, and ABR2, all in area 100. The branches connect to the ABRs using Frame Relay point-to-point subinterfaces. The verification plan lists the output of the show ip ospf database summary 10.100.0.0 command on a router B1, one of the branches. Which of the following is true regarding the output that could be listed for this command?
a. The output lists nothing unless 10.100.0.0 has been configured as a summary route using the area range command.
b. If 10.100.0.0 is a subnet in area 0, the output lists one Type 3 LSA, specifically the LSA with the lower metric when comparing ABR1’s and ABR2’s LSA for 10.100.0.0.
c. If 10.100.0.0 is a subnet in area 0, the output lists two Type 3 LSAs, one each created by ABR1 and ABR2.
d. None, because the Type 3 LSAs would exist only in the ABR’s LSDBs.

Answer: C. Each ABR, by definition, creates a single Type 3 LSA to represent a subnet known in one area to be advertised into another area. Assuming 10.100.0.0 is a subnet in area 0, both ABR1 and ABR2 would advertise a Type 3 LSA into area 100. The show ip ospf database summary command specifically lists type 3 network summary LSAs.

Answer: C. The Database Description (DD) packet lists a short LSA header but not the entire LSA. The Link State Request (LSR) packet asks the neighbors for a copy of an LSA. The Link State Update (LSU) holds the LSAs. LSAck simply acknowledges received LSAs, and Hello is used for neighbor discovery and neighbor state maintenance.

Answer: B and D. Because the subnet was stable before R5 arrived, the other routers will have elected a DR and BDR. OSPF does not preemptively elect a new DR nor BDR, so R5 will be neither (DROther). As a result, R5’s messages to the DR will be sent to the 224.0.0.6 all-DR-routers multicast address, and the DR’s messages directed to R5 will be sent to the 224.0.0.5 all-SPF-router address. 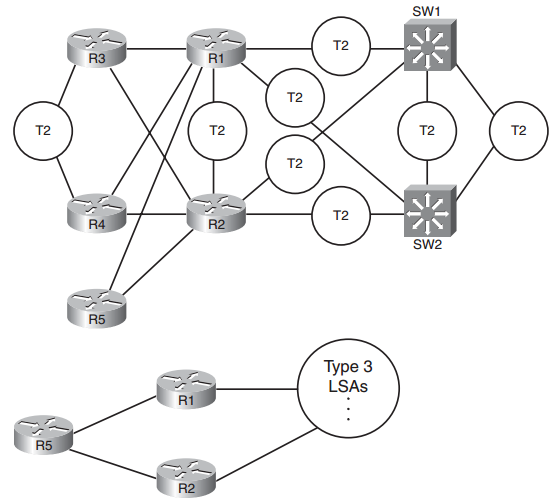 Q7. Which of the following LSA types describes topology information that, when changed, requires a router in the same area to perform an SPF calculation? (Choose two.)
a. 1
b. 2
c. 3
d. 4
e. 5
f. 7

Answer: A and B. OSPF builds the SPF tree based on the topology information Type 1 and Type 2 LSAs. Changes therefore require another SPF run. Changes to the other LSA types do not require an SPF calculation.

Answer: A and B. Because none of the interfaces have a bandwidth command configured, the only commands that can influence the OSPF cost are the auto-cost reference-bandwidth router subcommand and the ip ospf cost interface subcommand. To give the output shown in the question, either the interface cost could be set directly on all three interfaces listed. Alternatively, the reference-bandwidth could be set (in router configuration mode) to cause one of the interface costs to be as shown in the output, with the other two interfaces having their costs set directly.
For the wrong answers, the ip ospf cost interface s0/0/0.1 router subcommand does not exist—instead, it is an interface subcommand. An auto-cost of 64700, used as the numerator in the ref-bw/bandwidth cost calculation, does not result in any of the three listed interface costs.
For the two correct answers, with a default bandwidth of 1544 (Kbps) on the serial subinterfaces, a reference bandwidth of 1000 (Mbps) implies the math 1,000,000 / 1544, for an Interface cost of 647. With a default bandwidth of 100,000 Kbps (100 Mbps) on Fa0/0, a reference bandwidth of 2000 (MBps) implies math of 2,000 / 100 = 20.

Q9. Which of the following LSA types describe information related to topology or subnets useful for calculating routes for subnets inside the OSPF domain? (Choose three.)
a. 1
b. 2
c. 3
d. 4
e. 5
f. 7