You are here: Home / Cisco / CCNP Route FAQ: The Basics of BGP-4

Q1. If the weight attribute is used, is a higher or lower weight preferred?

Answer: The weight attribute is proprietary to Cisco and is an attribute that is determined locally on the router. The preference in selection is to the highest weight on the router. 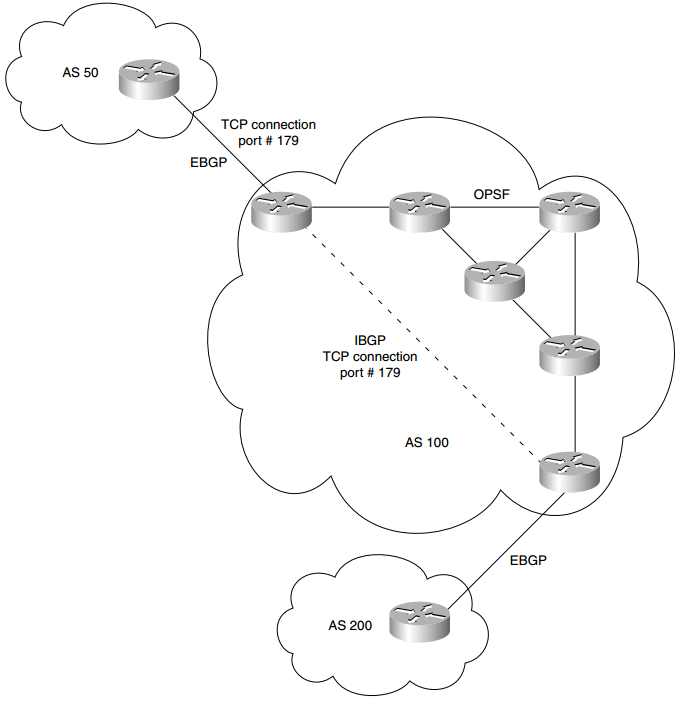 Q3. What is an alternative to using BGP-4 as the method of connection to the ISP?

Answer: The alternative method, suggested by Cisco, is to use a default route into the ISP and for the ISP to configure static routes into your autonomous system.

Q5. What does the command clear ip bgp * achieve, and why should it be used cautiously?

Answer: The command resets BGP peer associations, clears the BGP routing table, and reestablishes BGP connections to the neighbors. It should be used cautiously because the loss of connections will drop packets.

Q6. Give three reasons why you should not use BGP-4 to connect to the Internet.

Answer: It is ill-advised to use BGP-4 in certain conditions:

Answer: The command tells the router, the IP address of the BGP neighbor and the autonomous system to which the neighbor belongs. This information allows the router to create a TCP session with the neighboring router and exchange BGP routing information.

Q8. Explain briefly the purpose of the community attribute.

Answer: The community attribute is used to identify routers, without regard to geographic location, that have some common similarity.

Q9. In the route selection process, place the following in order of preference: origin code, highest weight, local preference, and MED. State the method of selection for the individual attributes themselves.

Q10. What command is used to enable the BGP-4 process?

Q11. Which command is used to show the BGP-4 connections between peers?

Answer: The command show ip bgp neighbor is used for this.

Q12. What is a mandatory attribute?

Answer: A mandatory attribute is an attribute that is well known. It contains information required in BGP messages in order to maintain the BGP network.

Q13. What type of routing protocol is BGP-4 classified as, and what does this mean?

Answer: BGP-4 is classified as an External Gateway Protocol (EGP), as opposed to OSPF, EIGRP, RIP, and so on, which are known as Interior Gateway Protocols (IGPs). If required, it can send a summary of the networks known within an organization to maximize security and minimize bandwidth overhead. It is used to convey routing information between autonomous systems.

Answer: A static route is a route that has been manually configured. It has the lowest administrative distance of either 0 or 1, depending on the configuration. This means that it will always take precedence and that it must be redistributed into a routing protocol for other routers to make use of it.

Q15. What is the transport protocol for BGP-4?

Answer: A default route is a route used when there is no entry for the remote network in the routing table. It is used to connect to the Internet and other routing domains when it is not practical to know all the available networks. It is sufficient to have an exit point from your network identified.

Answer: The four message types of BGP-4 are these:

Q19. What is policy-based routing?

Answer: Policy-based routing is the means by which traffic may be forced to take a different route from that determined by the dynamic routing protocol. It is defined on a hopby-hop basis in that the policy is stated on a router and determines which next hop will be used. The decisions may be based on source and/or destination.

Q20. What do the letters MED represent? Give a brief explanation of what this does.

Answer: The Multiple Exit Discriminator is an optional, nontransitive attribute. It is sent only to external BGP-4 peers and is used to influence routers in another autonomous system on the path to take into the autonomous system if multiple paths are available. The lower the value of the attribute, the higher the likelihood that the path will be chosen. By default, a router compares only the MED from routers that are in the same autonomous system as each other, but a different autonomous system from the determining router.

Answer: A community is a group of networks that share a common property. The commonality is defined by the optional transitive attribute, and it has no physical boundaries. A network can be a member of more than one community. When the community is defined, decisions or filtering can be made based on the group instead of the individual.

Q22. Give two reasons why peer groups are useful.

Answer: Peer groups are useful because this simplifies the configurations when they are shared by a group of peers. They are also more efficient because updates are generated once per peer group instead of on a per-router (peer) basis.

Answer: When a router sends an update onto a multiaccess (MA) link such as Ethernet, all routers on the link will hear the update and will propagate their own updates. When propagating a network heard from another router on the MA link, the router should keep the IP address of the source router and should not substitute its IP address. If every router substituted its address as the next-hop router, a packet would have to visit many routers on the same link instead of directing traffic to the router that first sent out the update.

Q24. What is the difference between a peer and a neighbor?

Answer: In external BGP-4, there is no difference between a neighbor and a peer. A peer is the BGP-4 term for a neighbor. Both terms refer to a router that is directly connected, with whom routing information is exchanged. In internal BGP-4 these routers are not necessarily physically adjacent, but they are the next logical hop router running the BGP-4.

Q26. In BGP-4, describe the purpose of the network command.

Answer: The network command permits BGP-4 to advertise a network if it is present in the routing table. It is not responsible for starting the BGP-4 process on an interface; instead, it identifies which networks the router originates.

Answer: On a broadcast multiaccess network such as Ethernet, the next-hop address will be the IP address of the advertising router. This command forces BGP-4 to advertise itself as the next-hop router instead of letting the protocol determine the address to be used. This avoids problems seen on NBMA networks or nonmeshed environments, such as X.25 and Frame Relay.

Q28. Which command is used to show all BGP-4 connections?