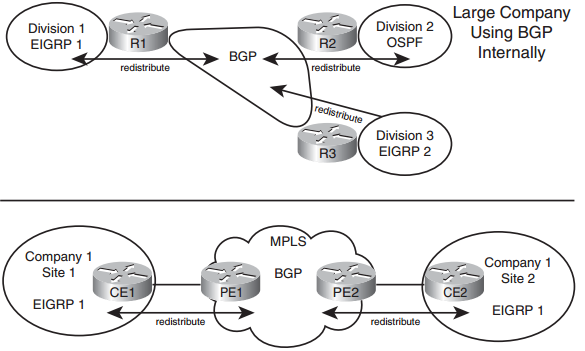 Q1. Which of the following answers is the least likely reason for an engineer to choose to use route redistribution?
a. To exchange routes between merged companies
b. To give separate control over routing to different parts of one company
c. To support multiple router vendors
d. To knit together an OSPF area if the area becomes discontiguous

Q2. For a router to successfully redistribute routes between OSPF and EIGRP, which of the following are true? (Choose two.)
a. The router must have one routing protocol configured, but configuration for both routing protocols is not necessary.
b. The router must have at least one working link connected to each routing domain.
c. The redistribute command must be configured under EIGRP to send the routes to OSPF.
d. The redistribute command should be configured under OSPF to take routes from EIGRP into OSPF.

Q4. Examine the following excerpt from the show ip eigrp topology 10.2.2.0/24 command on router R1. Which answer can be verified as definitely true based on this output?

Answer: C. This output is the external data section of a detailed view of an EIGRP topology table entry for an external route. This output confirms that this route was redistributed into EIGRP. If R1 were the redistributing router, the output would include the phrase “(this system)”; this example does not include that notation. The output means that on the router that did the redistribution, the route was redistributed from OSPF process 1, and the OSPF metric was 64. R1’s metric is not based on the OSPF metric of the route.

Answer: B. The redistribute ospf command will attempt to redistribute OSPF routes and connected routes from interfaces on which OSPF is enabled. The metric components include 1000 Kbps (or 1 Mbps), 100 tens-of-microseconds (or 1000 microseconds), 10 for the loading, 1 for the reliability, and 1500 for MTU. The EIGRP version of the redistribute command does not include a subnets option.

Answer: A and C. Because the routes come from OSPF and feed into OSPF, the metrics can be set with the usual tools, or the metric can default. When taking routes from OSPF into another OSPF process, the default metric is taken from the source route’s OSPF cost. Alternatively, the metric can be set for all routes, regardless of the route source, using the default-metric OSPF subcommand. The metric transparent keywords cannot be used for an OSPF redistribute command.

Q7. Examine the following excerpt from the show ip ospf database asbr-summary command on router R1 (RID 1.1.1.1). Which answer can be verified as definitely true based on this output?

Answer: D. This command lists the output of Type 4 Summary ASBR LSAs. The LSID identifies the redistributing ASBR (9.9.9.9). The advertising router is the ABR that created and flooded the LSA (3.3.3.3), and the metric is the ABR’s best metric route to reach the ASBR.

Answer: D. Routers add internal and external costs for E1 routes and use only external costs for E2 routes, so the cost for the route through R22 will always be lower. However, for a given prefix/length, OSPF always prefers intra-area routes first, then interarea, then E1, and finally, E2, all regardless of metric.