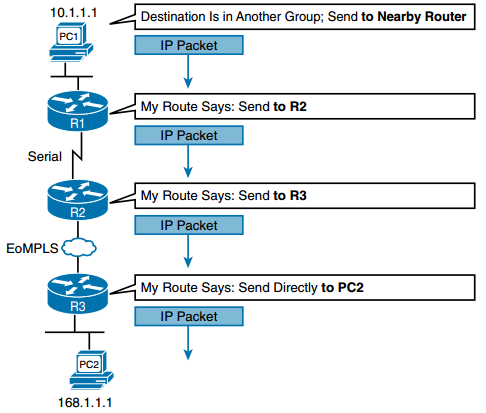 Q2. Imagine that PC1 needs to send some data to PC2, and PC1 and PC2 are separated by several routers. Both PC1 and PC2 sit on different Ethernet LANs. What are the largest entities (in size) that make it from PC1 to PC2? (Choose two answers.)
a. Frame
b. Segment
c. Packet
d. L5 PDU
e. L3 PDU
f. L1 PDU

Answer: C and E. Because PC1 and PC2 are separated by routers, the PCs must rely on the routers to use routing logic. With routing, the router discards the data link header of an incoming frame, making a decision of where to forward the packet deencapsulated from the frame. As a result, the largest entity that passes from PC1 to PC2 is the IPv4 packet (or IPv6 packet), which goes by the more general name of L3PDU.

Answer: C. Routers compare the packet’s destination IP address to the router’s IP routing table, making a match and using the forwarding instructions in the matched route to forward the IP packet.

Answer: A and C. Routers do all the actions listed in all four answers. However, the routing protocol does the functions in the two listed answers. Independent of the routing protocol, a router learns routes for IP subnets and IP networks directly connected to its interfaces. Routers also forward (route) IP packets, but that process is called IP routing, or IP forwarding, and is an independent process as compared with the work of a routing protocol.

Q10. A company implements a TCP/IP network, with PC1 sitting on an Ethernet LAN. Which of the following protocols and features requires PC1 to learn information from some other server device?
a. ARP
b. ping
c. DNS
d. None of these answers is correct.

Answer: C. Address Resolution Protocol (ARP) does allow PC1 to learn information, but the information is not stored on a server. The ping command does let the user at PC1 learn whether packets can flow in the network, but it again does not use a server. With the Domain Name System (DNS), PC1 acts as a DNS client, relying on a DNS server to respond with information about the IP addresses that match a given host name.