2. Which address is required in the command syntax of a standard ACL?

3. Which statement describes a difference between the operation of inbound and outbound ACLs?

4. Which three statements describe ACL processing of packets? (Choose three.)
An implicit deny any rejects any packet that does not match any ACE.*

6. A network administrator needs to configure a standard ACL so that only the workstation of the administrator with the IP address 192.168.15.23 can access the virtual terminal of the main router. Which two configuration commands can achieve the task? (Choose two.)

7. If a router has two interfaces and is routing both IPv4 and IPv6 traffic, how many ACLs could be created and applied to it?

8. Which three statements are generally considered to be best practices in the placement of ACLs? (Choose three.)

9. Refer to the exhibit. Which command would be used in a standard ACL to allow only devices on the network attached to R2 G0/0 interface to access the networks attached to R1?

10. Refer to the exhibit. If the network administrator created a standard ACL that allows only devices that connect to the R2 G0/0 network access to the devices on the R1 G0/1 interface, how should the ACL be applied?

12. On which router should the show access-lists command be executed?

13. What is the quickest way to remove a single ACE from a named ACL?

16. Which type of router connection can be secured by the access-class command?

17. Consider the following output for an ACL that has been applied to a router via the access-class in command. What can a network administrator determine from the output that is shown?

18. Refer to the exhibit. A router has an existing ACL that permits all traffic from the 172.16.0.0 network. The administrator attempts to add a new ACE to the ACL that denies packets from host 172.16.0.1 and receives the error message that is shown in the exhibit. What action can the administrator take to block packets from host 172.16.0.1 while still permitting all other traffic from the 172.16.0.0 network?

20. Refer to the exhibit. What will happen to the access list 10 ACEs if the router is rebooted before any other commands are implemented?

21. What is the effect of configuring an ACL with only ACEs that deny traffic?

22. Which type of ACL statements are commonly reordered by the Cisco IOS as the first ACEs?

23. A network administrator is configuring an ACL to restrict access to certain servers in the data center. The intent is to apply the ACL to the interface connected to the data center LAN. What happens if the ACL is incorrectly applied to an interface in the inbound direction instead of the outbound direction?

24. When would a network administrator use the clear access-list counters command?

25. Match each statement with the example subnet and wildcard that it describes. (Not all options are used.)

2. What is a disadvantage of using dynamic routing protocols?

4. An OSPF enabled router is processing learned routes to select best paths to reach a destination network. What is the OSPF algorithm evaluating as the metric?

5. After a network topology change occurs, which distance vector routing protocol can send an update message directly to a single neighboring router without unnecessarily notifying other routers?

6. What is the purpose of the passive-interface command?

7. Refer to the exhibit. Based on the partial output from the show ip route command, what two facts can be determined about the RIP routing protocol? (Choose two.)

8. While configuring RIPv2 on an enterprise network, an engineer enters the command network 192.168.10.0 into router configuration mode.
What is the result of entering this command?

9. Refer to the exhibit. A network administrator has issued the exhibited commands in an attempt to activate RIPng on interface gig0/0. What is causing the console message that is shown after RIP is enabled?

10. Refer to the exhibit. OSPF is used in the network. Which path will be chosen by OSPF to send data packets from Net A to Net B?

11. Which two events will trigger the sending of a link-state packet by a link-state routing protocol? (Choose two.)

12. Which two requirements are necessary before a router configured with a link-state routing protocol can build and send its link-state packets? (Choose two.)

13. When does a link-state router send LSPs to its neighbors?

14. Which routing protocol uses link-state information to build a map of the topology for computing the best path to each destination network?

15. A destination route in the routing table is indicated with a code D. Which kind of route entry is this?

16. Refer to the exhibit. Which interface will be the exit interface to forward a data packet with the destination IP address 172.16.0.66?

17. Which two requirements are used to determine if a route can be considered as an ultimate route in a router’s routing table? (Choose two.)

18. Which route is the best match for a packet entering a router with a destination address of 10.16.0.2?

19. Which type of route will require a router to perform a recursive lookup?

20. A router is configured to participate in multiple routing protocol: RIP, EIGRP, and OSPF. The router must send a packet to network 192.168.14.0. Which route will be used to forward the traffic?

21. Fill in the blank. Do not abbreviate.
When configuring RIPng, the default-information originate command instructs the router to propagate a static default route.​

22. Match the features of link-state routing protocols to their advantages and disadvantages. (Not all options are used.)

23. Match the characteristic to the corresponding type of routing. (Not all options are used.) 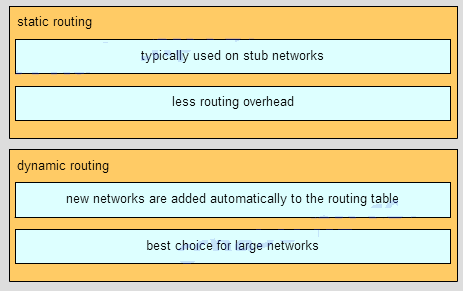 25. What two actions result from entering the network 192.168.1.0 command in RIP configuration mode on a router? (Choose two.)

26. Which dynamic routing protocol was developed as an exterior gateway protocol to interconnect different Internet providers?

27. In the context of routing protocols, what is a definition for time to convergence?

28. A destination route in the routing table is indicated witha code D. Which kind of route entry is this?

29. Match the router protocol to the corresponding category. (Not all options are used.)

30. Which route is the best match for a packet entering a router with a destination address of 10.16.0.2?

32. Which route will a router use to forward an IPv4 packet after examining its routing table for the best match with the destination address?