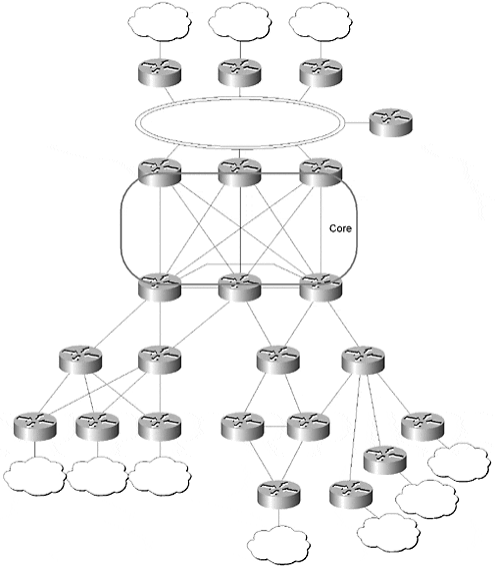 Answer: An EGP is an Exterior Gateway Protocol, which is a protocol designed to carry routing information between ASs. BGP is an EGP.

Q2. What prevents iBGP from being an effective IGP?

Answer: iBGP cannot determine if a path within an AS is a loop because the AS path remains the same within the AS.

Q3. Where will routes learned from an eBGP peer be propagated?

Answer: To all peers, iBGP and eBGP.

Q4. Why shouldn’t you redistribute iBGP routes into an IGP?

Answer: Because BGP isn’t an effective IGP, and redistributing iBGP routes into an IGP can cause routing loops.

Q5. What protocol do all BGP packets ride on top of?

Q6. If a neighbor relationship between two BGP peers constantly cycles through the Idle, Active, and Connect states, what action should you take?

Answer: Check to make certain IP connectivity is good between them.

Q7. Explain the significance of the next hop in BGP.

Answer: In BGP, the NEXT_HOP always refers to the IP address of the peer (in the neighboring AS) from which the route was received. This attribute is key for the correct behavior of the network as the NEXT_HOP has to be reachable (via an IGP route) for the prefix to be considered.

Q8. What possible solutions are there for load sharing outbound traffic to multiple ISPs?

Answer: Using only default routes out, accepting the full Internet routing table, using local preference or MEDs to prefer one path to another for certain external destinations, and accepting only a partial routing table.

Q9. All attributes being the same, what will break a tie in the BGP decision process?

Answer: The router ID of the advertising router.

Q10. What two things can be done to reduce the number of updates generated and sent by a router?

Q11. What is the default half-life of a dampened route?

Answer: The rate at which the penalty will be divided in half.

Q12. How does a route reflector advertise routes learned from an iBGP peer?

Answer: When using route reflectors (RR), the RR will reflect routes that are learned by iBGP to other clients (IBGP peers) of the RR.

Answer: A single AS.

Q14. Give an example of an application of conditional advertisement.

Answer: To advertise destinations that are normally sent to one provider through another provider if the connection through the normal provider fails.