Q1. True or false: LLQ is recommended for VoIP networks.

Q2. True or false: H.323 is an IETF standard, and SIP is an ITU standard for multimedia protocols.

Answer: False. H.323 is an ITU standard, and SIP is an IETF standard for multimedia.

Q3. True or false: An Erlang is a unit that describes the number of calls in an hour.

Answer: True. An Erlang is a telecommunications traffic unit of measurement representing the continuous use of one voice path for 1 hour.

Q4. What do you implement to stop packets from being transmitted when there is silence in a voice conversation?

Answer: VAD. Voice-activity detection suppresses packets when there is silence.

Q5. The variable delay of received VoIP packets is corrected with what kind of buffers?

Answer: Dejitter buffers are used at the receiving end to smooth out the variable delay of received packets.

Answer: True. With CCS, a separate channel (from the bearer channels) is used for signaling.

Q7. True or false: FXO ports are used for phones, and FXS ports connect to the PSTN.

Q8. True or false: SS7 provides mechanisms for exchanging control and routing messages in the PSTN.

Answer: True. SS7 implements call setup, routing, and control, ensuring that intermediate and far-end switches are available when a call is placed.

Q9. An organization uses what kind of system to gather and provide information for the customer before transferring her to an agent?

Q10. An organization uses what kind of system to route calls to agents based on the agent skill group or call statistics?

Q12. Label each of the following delays as fixed or variable:
a. Processing
b. Dejitter buffer
c. Serialization
d. Queuing
e. Propagation

Q13. How can you reduce serialization delay?

Answer: PQ-WFQ and LLQ. Both of these queuing techniques use a strict-priority queue. LLQ also provides class-based differentiated services.

15. True or false: The maximum one-way delay in the G.114 recommendation for acceptable voice is 200 ms.

16. True or false: FRF.12 is an LFI standard used in networks with VoFR and VoIP over Frame Relay.

17. An assessment of a network determines that the average round-trip time between two sites is 250 ms. Can an IPT solution be implemented between the sites?

Answer: Yes. An RTT of 250 ms means that the average one-way delay is 125 ms, which is less than the recommended maximum of 150 ms.

Answer: C. Q.SIG is the preferred protocol for inter-PBX trunks.

Answer: A. cRTP compresses the IP/UDP/RTP headers from 40 bytes to 2 or 4 bytes.

Answer: C. The digitizing process is divided into companding, and quantization and coding.

Q25. Which of the following are goals of IP telephony?
a. Use the existing IP infrastructure
b. Provide lower cost of ownership
c. Provide greater flexibility in voice communications
d. All of the above

Answer: D. All answers are correct.

Q26. An analysis of a 384-kbps WAN link shows complaints of voice quality issues between two sites when large file transfers take place. The circuit is running at 45 percent utilization. What QoS schemes should be implemented to alleviate this?

Answer: B. LFI and cRTP should be implemented to help with the serialization delay on slow-speed WAN circuits. LLQ will not help because the circuit has no congestion.

Answer: D. The G.729 codec is recommended on WAN links because of its lower bandwidth requirements and relatively high MOS.

Q28. Which technology reduces the amount of bandwidth used? (Select all that apply.)
a. QoS
b. LFI
c. cRTP
d. VAD

Q31. Which are drivers for Unified Communications?
a. Better quality
b. Reduce WAN costs
c. Flexibility to carry data, voice and video
d. Efficient integration with legacy PSTN infrastructure
e. Improvement of QoS on the network

Answer: B. SIP is defined is RFC 2453 and is used to establish, maintain, and terminate calls.

Answer: F. OAM should be provisioned on DSCP CS2 PHB.

Q44. Which is the recommended QoS mechanism for VoIP networks?
a. WRED
b. PQ
c. WFQ
d. LLQ
e. DSCP

Answer: C. LLQ is recommended for most VoIP networks.

The client has an existing Frame Relay network, as shown in Figure. The network has a large site and 50 small remote sites. The client wants a design for a VoIP network. The client wants to provide differentiated CoS for the voice, Systems Network Architecture (SNA), FTP, and other traffic. 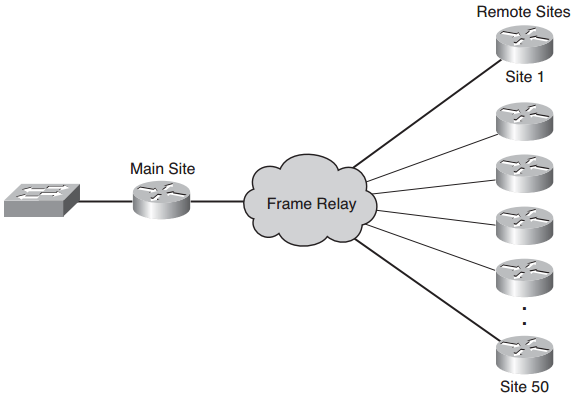 Q47. Based on the current network diagram, which Cisco IPT deployment model should you recommend?

Answer: Multisite WAN with centralized call processing with a CM cluster at the main site and SRST routers at the remote sites.

Q48. What feature should you recommend to provide call processing in the event of a WAN failure?

Answer: SRST enables the remote routers to provide call-handling support for IP phones when they lose connectivity to the CallManagers because of a WAN failure.

Q49. Which queuing technique should you recommend?

Answer: LLQ provides a strict queue for RTP (VoIP) traffic and differentiated class of service for all other traffic.

Q50. For Site 1, the current data traffic is 512 kbps, and video traffic is 0. What is the minimum bandwidth required to support four concurrent VoIP G.729 calls plus the data traffic to the site?

Answer: The minimum bandwidth is approximately 640 kbps. Each call is 30 kbps times four, which equals 120 kbps. The exiting 512 kbps of data traffic equals 640 kbps. The circuit should be provisioned at a higher speed to prevent the sustained peak utilization from being higher than 70 percent.

Q51. Should you implement a multisite WAN with centralized call processing CUCM cluster?

Answer: Yes, a CUCM cluster should be implemented at the main site.

Q52. What feature can you use to reduce bandwidth over the WAN links?

Answer: cRTP compresses the RTP/UDP/IP headers from 40 bytes to 2 to 4 bytes.

Q53. Which LFI technique should you use to reduce the serialization delay?

Answer: FRF.12 is the link and fragmentation technique used in Frame Relay networks.

Answer: C. H.323 is the ITU standard that provides a framework for the transport of voice, video, and data over packet-switched networks.

Answer: D. The default codec in Cisco VoIP dial peers is G.729, which has an 8 kbps bit rate.

Answer: C. RTP operates at the transport layer of the OSI model.

Answer: C. The H.225 standard defines the procedures for call setup and signaling.

Q58. What unit represents the average number of concurrent voice calls, commonly calculated for the period of 1 hour?
a. Kbps
b. Erlang
c. DS0
d. FXS

Answer: B. An Erlang is a unit that describes the number of calls in an hour.

Q59. Which feature does not transmit packets when there is silence?
a. Ear and mouth (E&M)
b. Voice-activity detection (VAD)
c. Dial peers
d. Digital silence suppressor (DSS)

Answer: B. VAD reduces traffic by not transmitting packets when there is silence in voice conversations.

Answer: B. LLQ is recommended for VoIP networks.

Q62. Where is the local loop located?
a. Between phones and the central office (CO) switch
b. Between two PBXs
c. Between the loopback interfaces of two VoIP routers
d. Between two PSTN switches

Answer: A. The local loop is located between the traditional phone and the CO switch.

Answer: C. Jitter is the variance in the amount of per-packet delay incurred during the transport of packets across the network, such as packets in an IP telephony voice call.