You are here: Home / MOBILE GAMES / Call Of Duty Mobile Just Has The Biggest Mobile Launch In Game History

The mobile launches of PUBG and Fortnite did not even come close in comparison.

Call of Duty Mobile, during its first week after launch, has scored over one hundred million downloads. This is a never before seen number for a mobile application, based on the information provided by mobile app analytics experts. In iOS, the game generated about 60 million installs, which alone has far exceeded the entire launch week numbers of its competitors across multiple other platforms. When PUBG and Fortnite were on the height of their popularity, the mobile version of those games only scored a measly 28 million and 22.5 million during their respective launch weeks.

According to the charts, the country with the most Call of Duty installs is the United States, with about 17.3 million (about 16.9 percent of the total download number), followed closely by India with 13.4 percent (about 13.7 million downloads). Brazil is the third country on the top, with 7 percent.

This 100 million result is just the beginning, as it is currently in the approval process. With the game’s developers being a subsidiary of Tencent, the results are just obvious. The number of installs would definitely skyrocket, as mobile games are extremely popular in China. Below is the launch trailer for the game:

It is not a surprise to see Call of Duty: Mobile doing this well at launch, as it is a bigger name than Fortnite and PUBG. Hopefully that this trend would continue into the future, as the Mobile version is a way for gamers who cannot afford to spend $60 to experience Call of Duty. 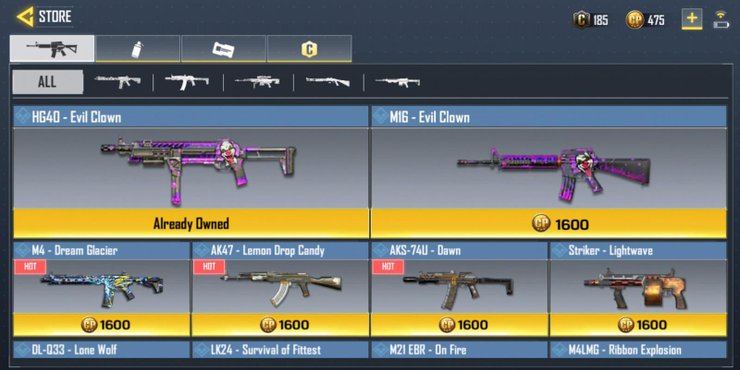 The skin shop, with various items purchasable by in-game coins

It’s great to see that the game is doing so well at launch. Hopefully, this success will continue into the future because it’s given a lot of gamers who couldn’t afford to spend $60 a way to experience Call of Duty. One of the reasons behind Call of Duty: Mobile’s solid launch is probably its versatility. The game can be installed on both Android and iOS at launch, on a way bigger range of devices than Fortnite and PUBG.

Interested in more of our video games related articles? Please check out this post for the best Assault Rifles in Call of Duty: Mobile.