Call of Duty: Mobile also follows the same formula as the other Battle Royale games – Selling a Premium Pass.

Call of Duty Mobile took only a week to set a new record for the entire mobile game market. Launched in early October, the game has taken over both Android and iOS by storm, with more than 100 million downloads reported by analysis platforms. In only the first week, the game has generated about 17 million dollars in revenue.

The game is available for free, with an in-app store contains products ranging from ₹70 to ₹700. They are mostly accessories like skins or weapons. To buy those items, you would have to exchange real money into Call of Duty Points.

The two available tiers of the Premium Pass

The Premium Battle Pass would give you access to Elite Missions, Call of Duty Points and much more. It is rather similar to PUBG Mobile’s Royale Pass. Currently, there are two options: Premium Pass and Premium Pass Plus. The contents in the Premium Pass is eligible for both Multiplayer mode and Battle Royale mode, however, the exact details of how they would work is not yet available, as Activision is still working on them. 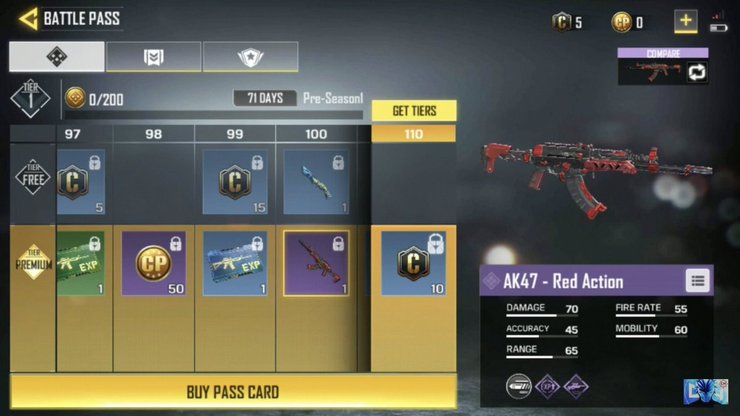 Some of the rewards that can be unlocked in the pass

Upgrading your account to the Premium Pass would cost 800 Call of Duty Credits, which is the equivalent of ₹799. The Premium Pass Plus cost more than double the amount, 2000 Credits. It can be purchased in the game store for ₹1,949.

The Premium Pass would reward players with the number of quests worth 8000 Call of Duty Credits, along with the Elite Tasks system and other premium rewards. Aside from that, the Pass also offers the Ghost character, G-series skin, and many more benefits.

The Pass would worth much more if you are able to do all the quest. It provides more than 12,000 Credits, which is more than a ₹7000 purchase.

Premium Pass Plus upgrade would grant players 25 tiers from the pass immediately, along with twelve thousand Call of Duty Credits as quest rewards. The other freebies incorporated with the Premium Pass Plus are weapon skins, in-game characters, Elite Missions, and crates.

Interested in more of our Call of Duty: Mobile related articles? Please check out this post for an overview of all the classes in Call of Duty Mobile.